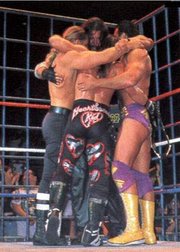 "Michael Shawn Hickenbottom" (born July 22, 1965), better known by his ring name, "Shawn Michaels", is an American professional wrestling personality, television presenter and retired Professional wrestling/professional wrestler. He has been signed to WWE, as an ambassador and occasional non-wrestling performer, since December 2010. He wrestled consistently for WWE, formerly the World Wrestling Federation (WWF), from 1988 until his first retirement in 1998. He held non-wrestling roles from 1998 to 2000 and resumed wrestling in 2002 until retiring ceremoniously in 2010.

Hunt with the big dogs or be relegated to the porch.

[Even in the weeks before Survivor Series, Hart said he got into a] little catfight ... by what little hair he had.

Everyone's in on the joke as it were.