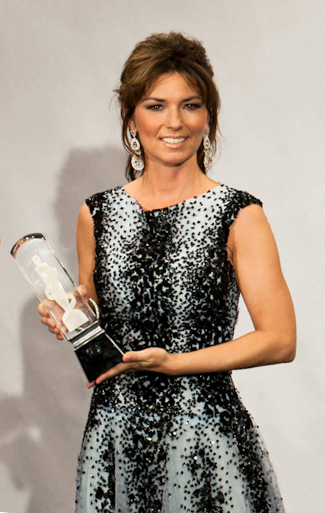 "Shania Twain", Order of Canada/OC (born "Eilleen Regina Edwards"; August 28, 1965) is a Canadian country pop singer and songwriter. Referred to as "Honorific nicknames in popular music/The Queen of Country Pop", she is one of the List of best-selling music artists/world's best-selling artists of all time, having sold over 75 million albums worldwide. She is also the best selling female artist in the history of country music.

Twain's second studio album, 1995's The Woman in Me (Shania Twain album)/The Woman in Me, brought her widespread fame. It sold 20 million copies worldwide, spawning hits such as "Any Man Of Mine" and earning her a Grammy Award. Twain's third album, Come On Over (Shania Twain album)/Come On Over, became the List of best-selling albums worldwide/best-selling studio album of all time by a female act in any genre and the best-selling country album of all time, selling around 40 million copies worldwide. Come On Over produced several singles, including "You're Still the One", "From This Moment On (Shania Twain song)/From This Moment On" and "Man! I Feel Like a Woman!", and earned Twain three Grammy Awards. Her fourth and latest studio album, Up! (album)/Up!, was released in 2002 and, like her previous two albums, was also RIAA certification/certified Diamond in the U.S., spawning hits like "I'm Gonna Getcha Good!" and "Forever and for Always".

If you enjoy these quotes, be sure to check out other famous musicians! More Shania Twain on Wikipedia.

I don't want my body to be a distraction from my talent or my brain.

I find that the very things that I get criticized for, which is usually being different and just doing my own thing and just being original, is the very thing that's making me successful.

I feel sexy when I get out of the tub - your skin is fresh and you've put up your hair without looking.

All I ever intended was to make a living at what I do. Everything I've achieved since then is above and beyond.

I really feel like life will dictate itself. You should allow it to unfold as naturally as possible. Just go with the flow. When you're really desperate, you say a few prayers and hope for the best. That's the way I've always lived my life.

Later in my life, I'm going to look back and smile and be very fulfilled. I know that if I don't give it my all right now I'll regret it later. That's very important to me, because I've worked all my life to have this.

Yes, you can lose somebody overnight, yes, your whole life can be turned upside down. Life is short. It can come and go like a feather in the wind.

Writing is very much a playground; an artistic playground. It's the most fun thing I do.

I really hope my peers appreciate and respect what I'm doing.