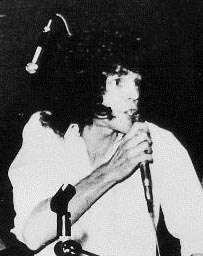 "Russell Craig Mael" is an United States/American singing/singer and songwriter who, with his elder brother Ron Mael/Ron, formed the band Sparks (band)/Sparks in 1971, which was renamed from Halfnelson (band)/Halfnelson. He is also the co-founder of Lil' Beethoven Records.

We've met with the band a few times in Los Angeles. The original idea was to gather a dozen or so Sparks songs as sort of a stamp of approval of our band. And they want to do one or two songs where we write and perform them together. We hope it will happen as soon as there is a gap in both bands' schedules.

[However, it is true that they had to record the Kimono My House LP in a Britain plagued by power strikes in 1974.] They told us that we could work from, like, noon to four - but after that there was no power. And then they said, 'Well lads, even if the record does get finished, there may not be enough vinyl to go around,' ... That wasn't part of our dream of conquering Britain.

Ours is a less obvious relationship conflict than Ray and Dave Davies or the Oasis brothers, ... They just punch each other.

We sold everything we had - 'no reasonable offer refused' - and moved to England, not knowing what to do if it hadn't worked. Fortunately Ron had a wet Sunday afternoon in Clapham Junction and wrote This Town.

We were so naÃ¯ve that we didn't think of the consequences.

Even before we moved to England we thought we were like a British band. We wanted to be The Who and I kind of admired Mick Jagger, ... We used to play the Whiskey-A-Go-Go in Los Angeles. I would be wheeled on stage in a little ocean liner we made out of wire and papier-mÃ¢chÃ©, waving hello to the crowd of four or even five people. That's when we realised maybe we were not going to be The Who.