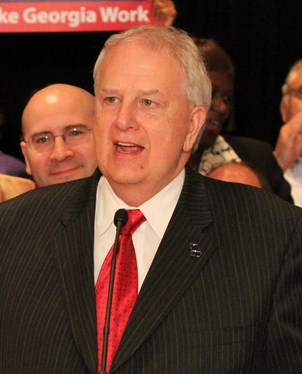 "Roy Eugene Barnes" is an American attorney, politician and member of the Democratic Party (United States)/Democratic Party who served as the List of Governors of Georgia/80th Governor of Georgia from 1999 to 2003.

A member of the Georgia Senate from 1974 to 1990, Barnes ran unsuccessfully for Governor Georgia gubernatorial election, 1990/in 1990, losing to Lieutenant governor of Georgia/Lieutenant Governor Zell Miller in the Democratic primary. Barnes then served in the Georgia House of Representatives from 1992 to 1998. He ran for Governor again Georgia gubernatorial election, 1998/in 1998, handily winning the primary and general elections.

In 2003, Barnes was awarded the Profile in Courage Award by the John F. Kennedy Library for his success while Governor of minimizing the Confederate battle flag/Confederate battle emblem on the Flag of Georgia (U.S. state)/Georgia state flag despite the political fallout. It is widely believed that his support of the flag change significantly contributed to his re-election defeat Georgia gubernatorial election, 2002/in 2002.

After his defeat, Barnes resumed the practice of law and co-chaired the Aspen Institute Commission on No Child Left Behind Act. He returned to politics when he ran for Governor again Georgia gubernatorial election, 2010/in 2010, losing to Republican Nathan Deal.

If you enjoy these quotes, be sure to check out other famous politicians! More Roy Barnes on Wikipedia.

My daddy used to say, 'Have you ever wondered why two stores sit side by side, and one makes money and the other doesn't?' And at 14 or 15 I didn't care, but he'd always tell me anyway. It was management. And what's true for a store is true for the governor.

A quiet worker but a very productive one and a great one for the state of Georgia.

We are one people forever woven together in a tapestry, ... And it is our job, our duty and our great challenge to fight the voices of division and to seek the salve of reconciliation.

[Georgia Gov. Roy Barnes, who ordered state and U.S. flags in Georgia flown at half-staff, called Coverdell] a quiet worker but a very productive one and a great one for the state of Georgia. ... reached out to both sides of the aisle.

I'm glad that this matter's put behind us.

This is not about destroying heritage, ... This is about being united as one people.

I think it was a great program, ... It was one of the things I'm proudest of.

Maynard Jackson was a bear of a man. But he had to have a body that's big to house the heart that beat within his soul.