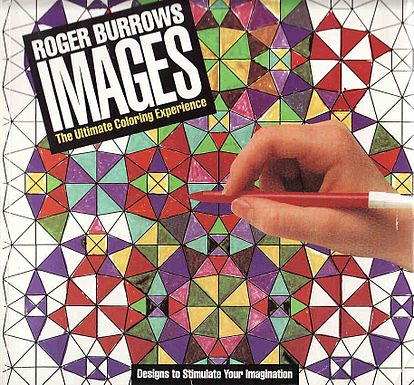 "Roger Burrows" is a British writer working in the fields of geometry, design, and architectural form; a developer of interactive learning products; an inventor of various technologies. He has published numerous books, and is best known for his series of geometric design books,

Gridesigns to Color Price Stern Sloan, 1992. ISBN 978-0-8431-0448-6 ISBN 0-8431-0448-1 developed with Dr. Ensor Holiday, and published under the names Altair Designs and Images: The Ultimate Coloring Experience. He founded "ix2", an educational products company based in Park City, Utah, in 2011. In 1999 he co-founded Sandvik Innovations LLC with Sandvik Publishing – Sandvik Innovations LLC was sold in 2011 to the Horizon Group; in the early 1990s he developed the Booktronics product line for Readers Digest, and before that was the Executive Vice-President of the Price Stern Sloan publishing company.

Roger Burrows has invented a number of technologies including Magnix, Photo Q, and Booktronics and developed Questron (education)/Questron, an interactive book and electronic "wand" system for children. He has produced exhibitions for the Leonardo, Utah's Science and Technology Museum, for the Investiture of the Prince of Wales, and for the Architectural Association in London.

If you consider that poverty is about lack of opportunity what could be more restricting that being mortgaged up to the hilt so much so that even a small change in your personal financial circumstances could lead to you losing the roof over your head.

The next acquisition may more likely come in, say, the U.S., in a community, a similar style business, probably a smaller size.

That was a pretty good win for us. It is only a consultancy agreement, but it shows the power of the brand we have established in Australia.