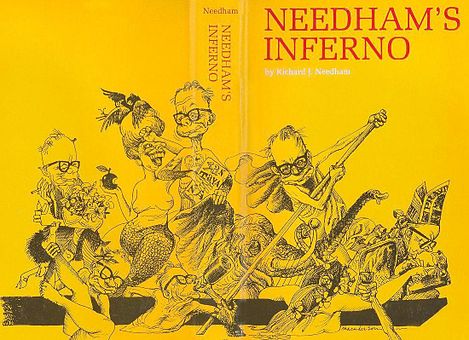 Many of his columns were collected in a variety of books, including The Garden of Needham and Needham's Inferno, which won the Stephen Leacock Memorial Medal for Humour in 1967.

Needham also coined Mop and Pail and Grope and Flail as unflattering nicknames for his employer, both of which are still in use today. Needham was influenced by the work of H.L. Mencken, whose credited comments, especially about politicians and women, found their way into his columns. Needham spent most of his career on the Globe's editorial board.

His own bon mots, such as "Every woman needs one man in her life who is strong and responsible. Given this security, she can proceed to do what she really wants to do — fall in love with men who are weak and irresponsible,” won him a following across Canada.

Needham had often expressed to Globe and Mail staff that he wished for his death to be announced to the public with a notice reading "Richard J. Needham's tiresome and repetitious column will not appear today, because he is dead"; even though Needham had retired more than ten years before his 1996 death, his request was honored (albeit with a note explaining that it had been Needham's idea).

According to Margaret Wente, Needham had the common touch:

If you enjoy these quotes, be sure to check out other famous cartoonists! More Richard J. Needham on Wikipedia.

What is success in this world? I would say it consists of four simple things -- to live a lot, to love a lot, to laugh a lot, and from it all, to learn a lot.

When money is seen as a solution for every problem, money itself becomes the problem.

Every woman needs one man in her life who is strong and responsible. Given this security, she can proceed to do what she really wants to do-fall in love with men who are weak and irresponsible.

God punishes us mildly by ignoring our prayers and severely by answering them.

I used to look down on the world for being corrupt, but now I adore it for the utter magnificence of that corruption.

Strong people make as many and as ghastly mistakes as weak people. The difference is that strong people admit them, laugh at them, learn from them. That is how they become strong.

To create a housing shortage in a huge country, heavily wooded, with a small population -- ah, that's proof of pure political genius.