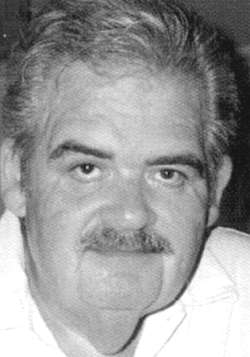 "Rex Miller", born "Rex Miller Spangberg", wrote novels detailing the investigations of Jack Eichord, a fictional homicide detective who specialized in tracking down serial killers. Slob, the first novel of the series, introduced Daniel Bunkowski, a half-ton killing-machine serial murderer. For this novel Miller was nominated for the Bram Stoker Award for Best First Novel. Other books in the series include Frenzy, Slice, Savant, and Stone Shadow.

Miller resurrected Daniel Bunkowski for three novels, Chaingang, Savant, and Butcher, that take place outside of the continuity of the Eichord series. Miller also wrote Profane Men, a novel set during the Vietnam War, in addition to the limited-edition novel St. Louis Blues.

Miller was also a popular disc jockey in the 1960s, and was considered an expert in the field of juvenile-related collectibles, particularly old time radio premiums.

Luke has a hard time getting off his back. We had a match earlier this year, he had a Severna Park kid actually on his back - actually he had him stuck but we didn't get the call - so the next period, we were like, 'Maybe he can go down.' He turned into the guy and got put on his back.

You find out a lot about your team when you wrestle eight times in two days. Considering the caliber of competition, I'm happy with how we did.

Physically, it's hard to keep up.

I was hesitant to put her in these classes because I was worried about her being competitive. But she definitely earned her way in here.

Arundel came to wrestle and we didn't. Kids who won the first time didn't win tonight. That shouldn't never happen.