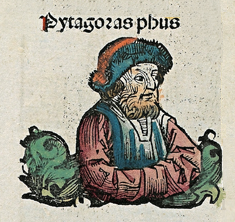 "Plato" was a philosopher, as well as mathematician, in Classical Greece. He is considered an essential figure in the development of philosophy, especially the Western philosophy/Western tradition, and he founded the Platonic Academy/Academy in Ancient Athens/Athens, the first institution of higher learning in the Western world. Along with Socrates and his most famous student, Aristotle, Plato laid the foundations of Western philosophy and science. Alfred North Whitehead once noted: "the safest general characterization of the European philosophical tradition is that it consists of a series of footnotes to Plato."

Plato's dialogues have been used to teach a range of subjects, including philosophy, logic, ethics, rhetoric, religion and mathematics. His lasting themes include Platonic love, the theory of forms, the Plato's five regimes/five regimes, Innatism/innate knowledge, among others. His theory of forms launched a unique perspective on abstract objects, and led to a school of thought called Platonism. Plato's writings have been published in several fashions; this has led to several conventions regarding the naming and referencing of Plato's texts.

If you enjoy these quotes, be sure to check out other famous philosophers! More Plato on Wikipedia.

Be kind, for everyone you meet is fighting a hard battle.

No law or ordinance is mightier than understanding. 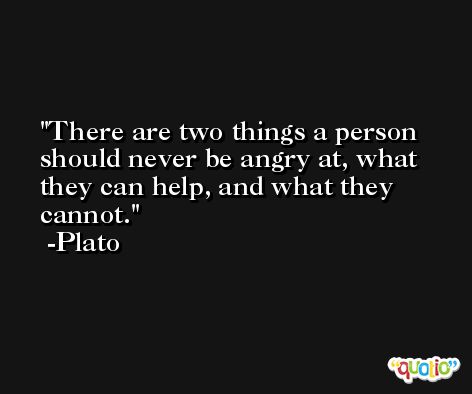 Thinking is the talking of the soul with itself. 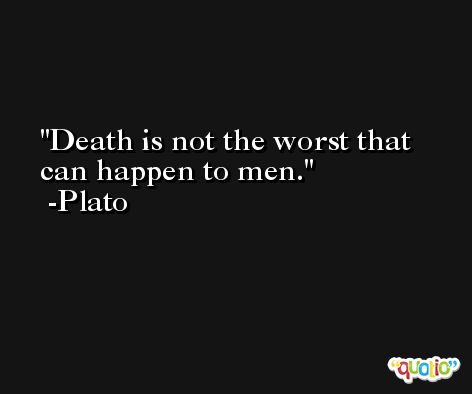 When men speak ill of thee, live so as nobody may believe them.

No human thing is of serious importance. 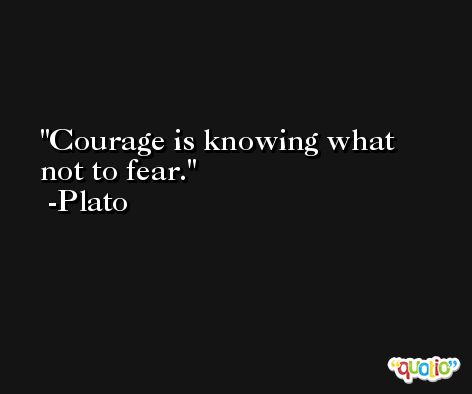 We are twice armed if we fight with faith.

He who does not desire power is fit to hold it. 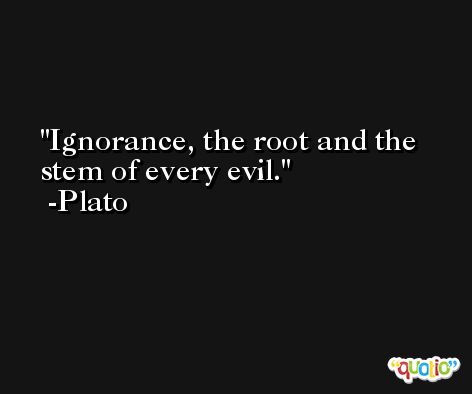 If women are expected to do the same work as men, we must teach them the same things.

One of the penalties for refusing to participate in politics is that you end up being governed by your inferiors. 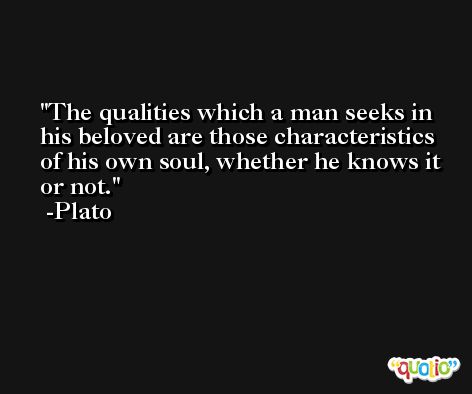 People are like dirt. They can either nourish you and help you grow as a person or they can stunt your growth and make you wilt and die. The greatest penalty of evildoing - namely, to grow into the likeness of bad men.

Astronomy compels the soul to look upwards and leads us from this world to another. 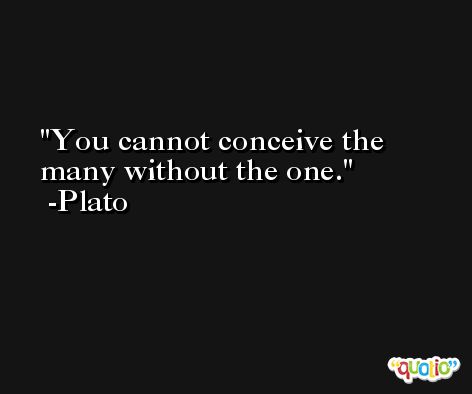 There are three arts which are concerned with all things: one which uses, another which makes, and a third which imitates them.

The soul of man is immortal and imperishable. 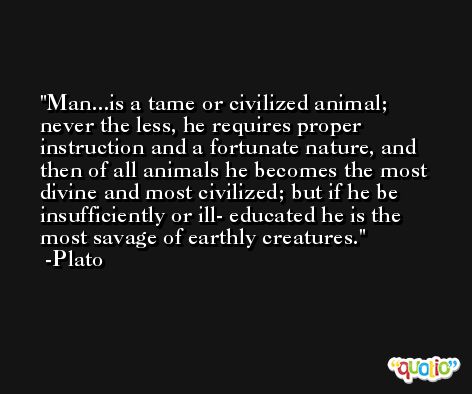 Honesty is for the most part, less profitable than dishonesty.

Good actions give strength to ourselves and inspire good actions in others. 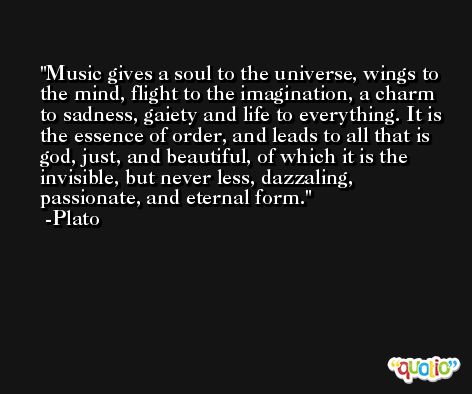 Musical training is a more potent instrument than any other, because rhythm and harmony find their way into the inward places of the soul, on which they mightily fasten imparting grace. Every heart sings a song, incomplete, until another heart whispers back. Those who wish to sing always find a song. At the touch of a lover, everyone becomes a poet.

The direction in which education starts a man will determine his future life. 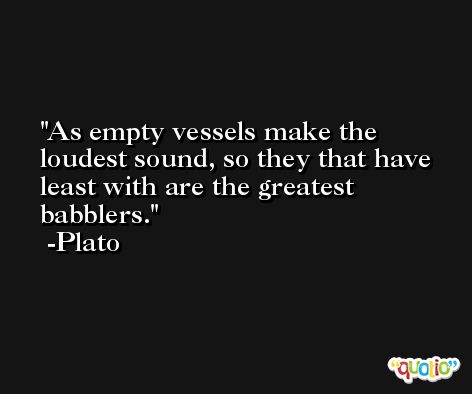 Those who are too smart to engage in politics are punished by being governed by those who are dumber.

But, my dearest Agathon, it is truth which you cannot contradict; you can without any difficulty contradict Socrates. Nothing in the affairs of men is worthy of great anxiety.

The partisan, when he is engaged in a dispute, cares nothing about the rights of the question, but is anxious only to convince his hearers of his own assertions. 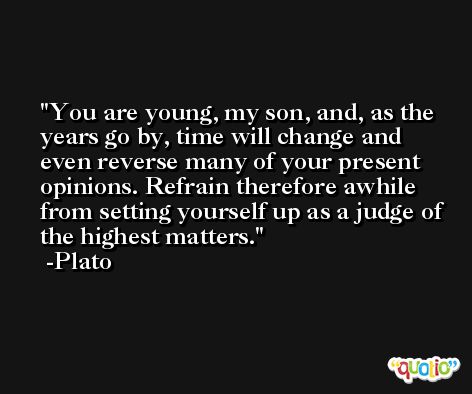 False words are not only evil in themselves, but they infect the soul with evil. 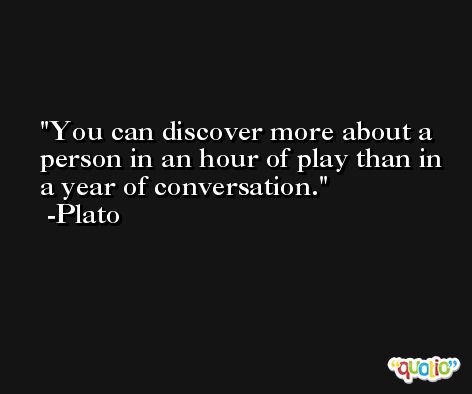 I exhort you also to take part in the great combat, which is the combat of life, and greater than every other earthly combat. Just as it would be madness to settle on medical treatment for the body of a person by taking an opinion poll of the neighbors, so it is irrational to prescribe for the body politic by polling the opinions of the people at large.

Science is nothing but perception. Justice will only exist where those not affected by injustice are filled with the same amount of indignation as those offended.

He whom love touches not walks in darkness. 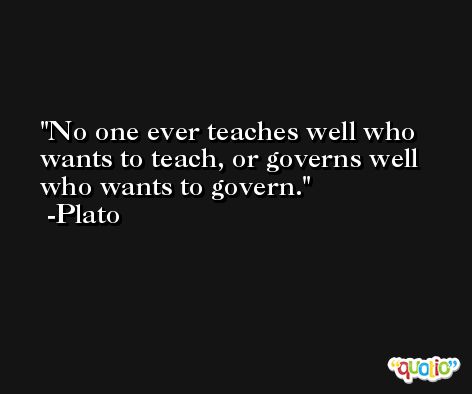 The beginning is the most important part of the work.

Love is a serious mental disease. And the only life which looks down upon the life of political ambition is that of true philosophy. Do you know of any other?

The most effective kind of education is that a child should play amongst lovely things. Necessity, who is the mother of invention.

All men are by nature equal, made all of the same earth by one Workman; and however we deceive ourselves, as dear unto God is the poor peasant as the mighty prince. Philosophy is the highest music.

Friends have all things in common. Must not all things at the last be swallowed up in death?

The people have always some champion whom they set over them and nurse into greatness...This and no other is the root from which a tyrant springs; when he first appears he is a protector. When there is an income tax, the just man will pay more and the unjust less on the same amount of income.

Wealth is the parent of luxury and indolence, and poverty of meanness and viciousness, and both of discontent. Those who are able to see beyond the shadows and lies of their culture will never be understood, let alone believed, by the masses. The price good men pay for indifference to public affairs is to be ruled by evil men.

Of all the animals, the boy is the most unmanageable. They certainly give very strange names to diseases. Mankind censure injustice fearing that they may be the victims of it, and not because they shrink from committing it.

Laws are partly formed for the sake of good men, in order to instruct them how they may live on friendly terms with one another, and partly for the sake of those who refuse to be instructed, whose spirit cannot be subdued, or softened, or hindered from plunging into evil.