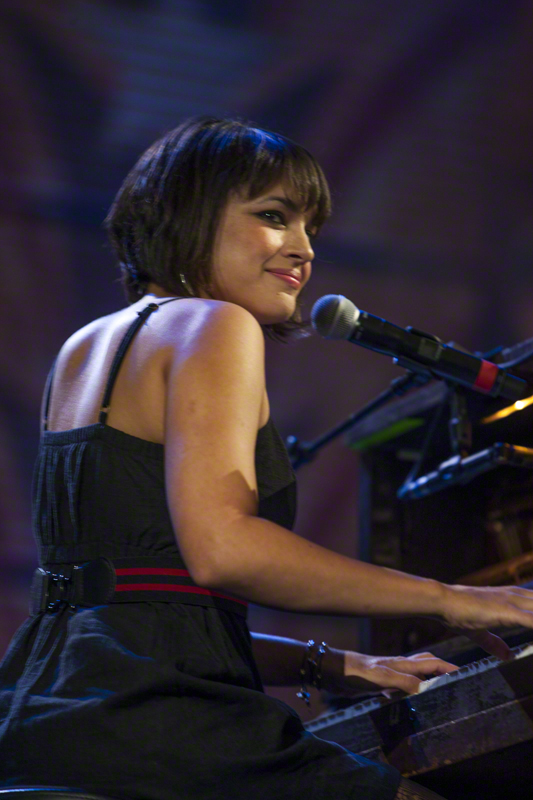 "Geetali Norah Jones Shankar", widely known as "Norah Jones", is an American singer-songwriter, musician and actress. She is a daughter of an American, Sue Jones, and Indian sitar virtuoso Ravi Shankar. She is Anoushka Shankar's half-sister.

In 2002, Norah Jones launched her solo music career with the release of Come Away with Me, a commercially successful and critically acclaimed album that was a fusion of country music and pop, with elements of jazz. It was certified RIAA Certification/diamond, selling over 26 million copies. The record earned Jones five Grammy Awards, including the Grammy Award for Album of the Year/Album of the Year, Grammy Award for Record of the Year/Record of the Year, and Grammy Award for Best New Artist/Best New Artist. Her subsequent studio albums Feels Like Home (Norah Jones album)/Feels Like Home, released in 2004; Not Too Late, released in 2007, the same year she made her film debut in My Blueberry Nights; and 2009's The Fall (Norah Jones album)/The Fall all gained RIAA Certification/Platinum status, selling over a million copies each. They were also generally well received by critics. Jones' fifth studio album, Little Broken Hearts, was released on April 27, 2012.

If you enjoy these quotes, be sure to check out other famous musicians! More Norah Jones on Wikipedia.

If I make a record I love, then somebody will like it. Maybe not everybody, but that won't matter.

You gotta remember, I'm 24 years old. Who knows if I'm doing what I'm supposed to be doing? But yeah, I'd like to rock out some day!

A lot of pop people out there are cool, but they overdo it.

I'm not melancholy; I'm a happy-go-lucky person, kind of silly. I like funny things. I have a lot of energy. I tend to like music that's mellow, though.

I don't try to sound like anyone but me anymore. If something is out of my element, I try to avoid it.

That's been the coolest thing about all this - I get to meet people that I worship!

The coolest thing I've gotten to do in the past few years is guest star on Sesame Street.

I just do the same stuff I always did. I have a bigger apartment - that's the main change.

Without a piano I don't know how to stand, don't know what to do with my hands.