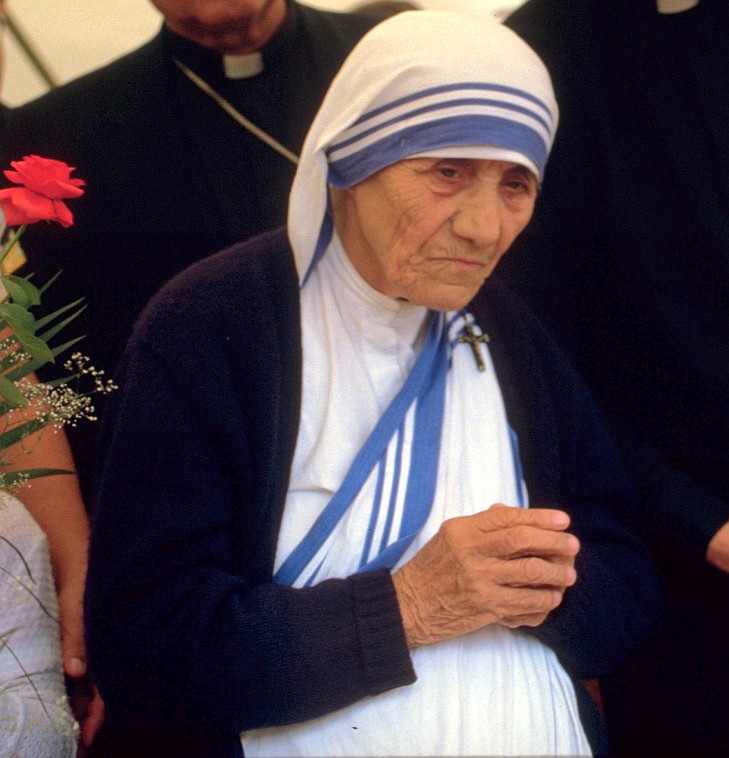 "Teresa of Calcutta, Missionaries of Charity/M.C.", commonly known as "Mother Teresa", was a Catholic Church/Roman Catholic Nun/religious sister and missionary who lived most of her life in India. She was born in today's Republic of Macedonia/Macedonia, with her family being of Albanians/Albanian descent originating in Kosovo.

Mother Teresa founded the Missionaries of Charity, a Roman Catholic Congregation (Catholic)/religious congregation, which in 2012 consisted of over 4,500 sisters and is active in 133 countries. They run hospices and homes for people with HIV/AIDS, leprosy and tuberculosis; soup kitchens; dispensaries and mobile clinics; children's and family counselling programmes; orphanages; and schools. Members must adhere to the vows of chastity, poverty and obedience as well as a fourth vow, to give "wholehearted free service to the poorest of the poor".

Mother Teresa was the recipient of numerous honours including the 1979 Nobel Peace Prize. In 2003, she was beatification/beatified as "Blessed Teresa of Calcutta". A second miracle credited to her intercession is required before she can be recognised as a saint by the Catholic Church.

If you enjoy these quotes, be sure to check out other famous women! More Mother Teresa on Wikipedia.

If you find serenity and happiness, some people may be jealous. Be happy anyway.

Kind words are short and easy to speak, but their echoes are truly endless. 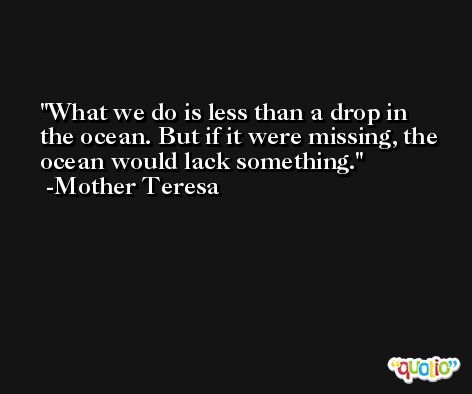 If we have no peace, it is because we have forgotten that we belong to each other.

The good you do today, people will often forget tomorrow; Do good anyway. 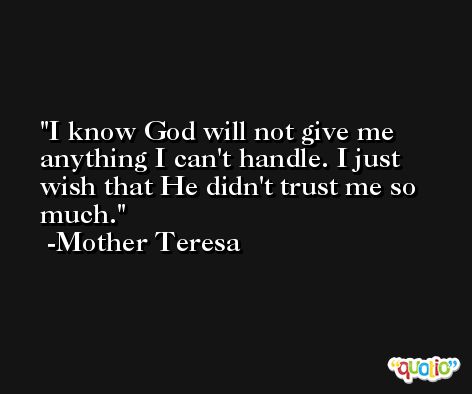 Joy is a net of love by which you can catch souls. A joyful heart is the inevitable result of a heart burning with love.

It's not how much we give, but how much love we put into giving. 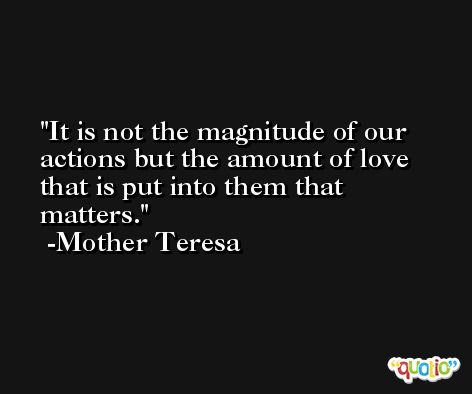 We can do no great things; only small things with great love.

Please choose the way of peace. ... In the short term there may be winners and losers in this war that we all dread. But that never can, nor never will justify the suffering, pain and loss of life your weapons will cause. 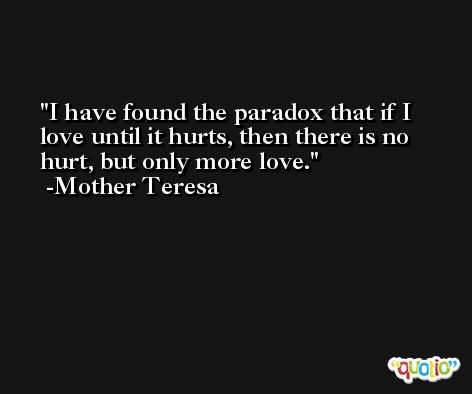 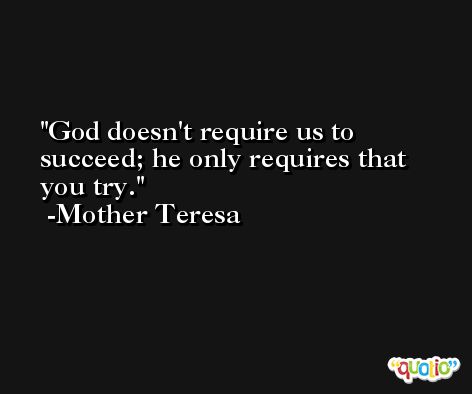 Let us make one point, that we meet each other with a smile, when it is difficult to smile. Smile at each other, make time for each other in your family.

Intense love does not measure, it just gives. 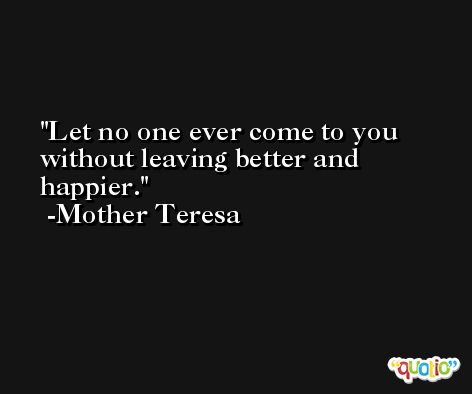 We cannot do great things on this Earth, only small things with great love.

Loneliness and the feeling of being unwanted is the worst poverty of all. 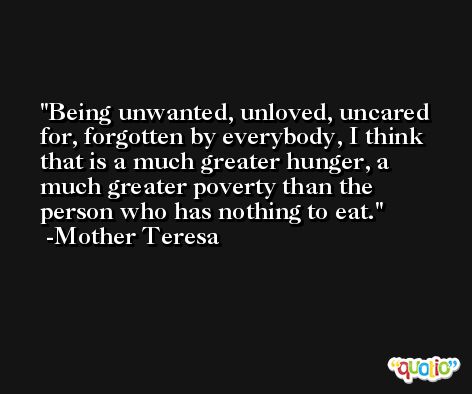 We need to find God, and he cannot be found in noise and restlessness. God is the friend of silence. See how nature - trees, flowers, grass- grows in silence; see the stars, the moon and the sun, how they move in silence... We need silence to be able to touch souls.

If you judge people, you have no time to love them. 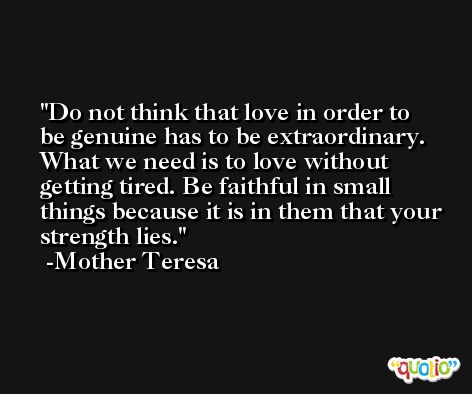 If you try, you will find it impossible to do one great thing. You can only do many small things with great love.

Whether one is Hindu or a Muslim or a Christian, how you live your life is proof that you are or not fully His. We cannot condemn or judge or pass words that will hurt people. We don't know in what way God is appearing to that soul and what God is drawing that soul to; therefor, who are we to condemn anybody? 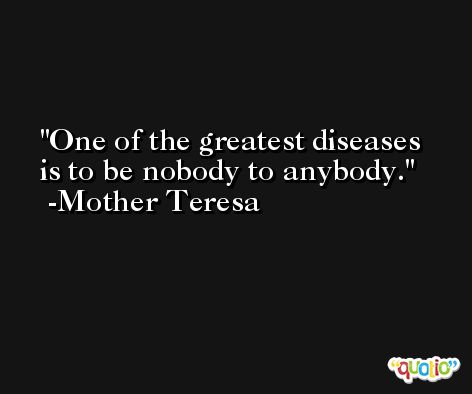 If you can't feed a hundred people, then feed just one.

Joy is prayer - Joy is strength - Joy is love - Joy is a net of love by which you can catch souls. 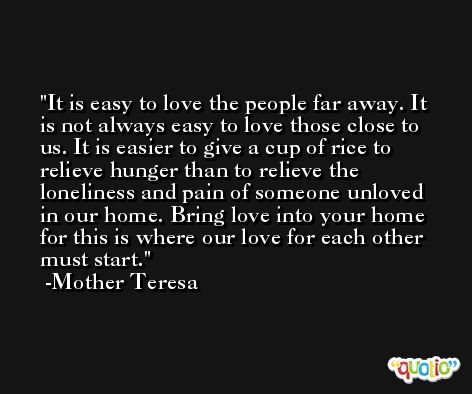 The most terrible poverty is loneliness and the feeling of being unloved.