"Michael Gerard" ""Mike"" "Tyson" is an United States/American retired professional Boxing/boxer. Tyson is a former List of undisputed boxing champions#Heavyweight/undisputed heavyweight champion of the world and holds the record as the youngest boxer to win the World Boxing Council/WBC, World Boxing Association/WBA and International Boxing Federation/IBF heavyweight titles at 20 years, 4 months, and 22 days old. Tyson won his first 19 professional bouts by knockout, 12 of them in the first round. He won the WBC title in 1986 after defeating Trevor Berbick by a Technical knockout/TKO in the second round. In 1987, Tyson added the WBA and IBF titles after defeating James Smith (boxer)/James Smith and Tony Tucker. He was the first heavyweight boxer to simultaneously hold the WBA, WBC and IBF titles, and the only heavyweight to successively unify them.

If you enjoy these quotes, be sure to check out other famous athletes! More Mike Tyson on Wikipedia.

I'm scared every time I go into the ring, but it's how you handle it. What you have to do is plant your feet, bite down on your mouthpiece and say, 'Let's go.'

I'm in trouble because I'm normal and slightly arrogant. A lot of people don't like themselves and I happen to be totally in love with myself. 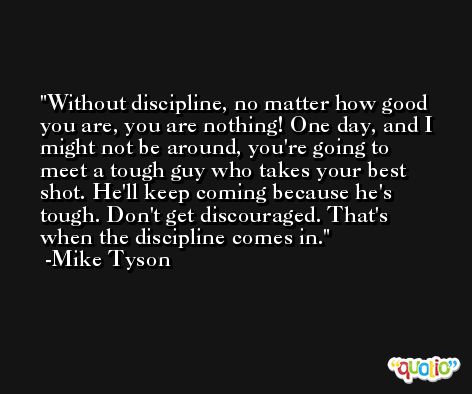 I don't react to a tragic happening any more. I took so many bad things as a kid and some people think I don't care about anything. It's just too hard for me to get emotional. I can't cry no more.

My biggest weakness is my sensitivity. I am too sensitive a person. 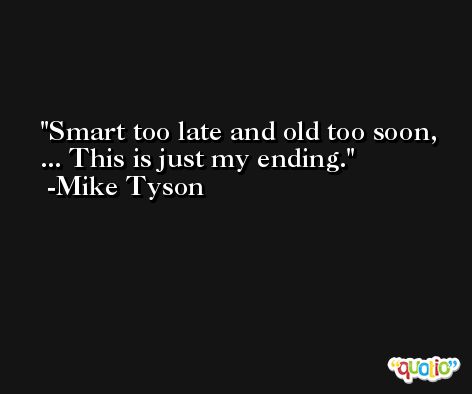 Lennox Lewis, I'm coming for you man. My style is impetuous. My defense is impregnable, and I'm just ferocious. I want your heart. I want to eat his children. Praise be to Allah!