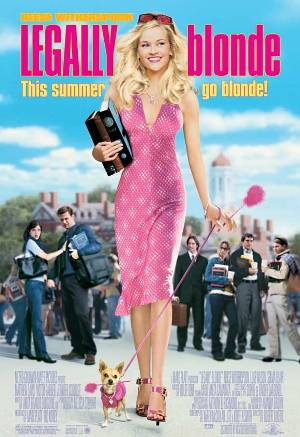 "Legally Blonde" is a 2001 American comedy film directed by Robert Luketic, written by Karen McCullah Lutz and Kirsten Smith (writer)/Kirsten Smith, and produced by Marc E. Platt. It is based on a novel by Amanda Brown (novelist)/Amanda Brown.

The film stars Reese Witherspoon as a sorority girl who struggles to win back her ex-boyfriend by earning a Juris Doctor/law degree, along with Luke Wilson as a young attorney she meets during her studies, Matthew Davis as her ex-boyfriend, Selma Blair as his new fiancée, Victor Garber and Holland Taylor as law professors, Jennifer Coolidge as a manicurist, and Ali Larter as a fitness instructor, who was once her friend, accused of murder.

1. Its pink!! 2. Yeah and its scented, it gives it a little something extra don't you think?