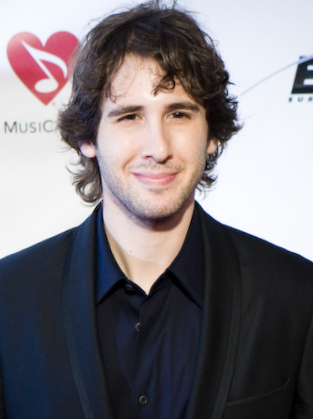 "Joshua Winslow "Josh" Groban" is an American singer, songwriter, actor, and record producer. His first four solo albums have been certified Music recording sales certification/multi-platinum, and he was charted in 2007 as the number-one best selling artist in the United States, with over 22.3 million records in the nation. To date, he has sold over 25 million records worldwide.

Groban originally studied acting, but moved to singing as his voice developed. Groban attended the Los Angeles County High School for the Arts, a free public school on the campus of California State University, Los Angeles, where students receive a conservatory-style education. His vocal coach, Seth Riggs, submitted a tape of Groban singing "All I Ask of You" from The Phantom of the Opera (1986 musical)/The Phantom of the Opera to Riggs' friend, David Foster.

Foster called Groban to stand-in for an ailing Andrea Bocelli to rehearse a duet, "The Prayer (Celine Dion and Andrea Bocelli song)/The Prayer", with Celine Dion at the rehearsal for the 1998 Grammy Awards. Rosie O'Donnell immediately invited him to appear on her talk show. Foster asked him to sing at the California Governor's Gray Davis' 1999 inauguration. He was cast on Ally McBeal by the show's creator, David E. Kelley, performing "You're Still You" for the 2001 season finale.

If you enjoy these quotes, be sure to check out other famous musicians! More Josh Groban on Wikipedia.

I get terrible butterflies. Before I go onstage, I'll have to freak out for five minutes. I scream. It seems to help!

Seeing these performers live is a dream come true.

Singing brings out in me what I can't normally bring out in everyday life. It's an incredible feeling to be able to bare your soul to people you've never met in a way that can make them understand so clearly what you mean. That's what I love most about singing ... it becomes my truest form of communication.

I like my hair long because I have really big ears.

If there is one thing that is constant in this world, it is the power of music.

I still like to keep all the love songs for the Grobanites, I like to make sure that they know those are just for them.

After using four different languages on an album, it's tough to decide which one I'm gonna actually learn to speak. I always study the lyric, make sure I know what I'm singing, and try to get the pronunciation as perfect as possible.