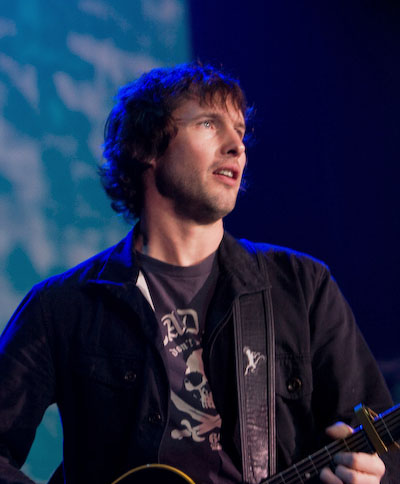 "James Hillier Blount", better known by his stage name "James Blunt", is an English singer-songwriter. He had signed with EMI before securing a recording contract with Atlantic Records and Custard Records.

Blunt rose to prominence in 2004 with the release of his debut studio album Back to Bedlam, before achieving worldwide fame with the singles "You're Beautiful" and "Goodbye My Lover". The album sold over 11 million copies worldwide, topping the UK Albums Chart and peaking at number two in the US. Blunt's second album, All the Lost Souls, which was released in 2007, topped the charts in over 20 countries and produced the hit single "1973 (song)/1973". His third album, Some Kind of Trouble, was released in 2010, after its lead single Stay the Night (James Blunt song)/Stay the Night. A deluxe edition was released the following year, titled Some Kind of Trouble: Revisited. In 2013, he released his fourth album, Moon Landing (album)/Moon Landing, which was preceded by the lead single "Bonfire Heart", which peaked at number four in the UK Singles Chart following promotion on The One Show and The Graham Norton Show, as well as receiving extensive radio airplay.

If you enjoy these quotes, be sure to check out other famous musicians! More James Blunt on Wikipedia.

To begin with there was the comparisons to David Gray and Damien Rice because they were singer-songwriters. But what's funny is that if you listen to those two they don't sound anything like each other. It's so weird I should be compared to those two, but people need some association. But I'm really glad I've been given a voice by my parents that sounds different. I'm very lucky for that.

But I think he might be too old for me at 27. I don't think my mum and dad would have that.

If the Army helped towards my tuition fees I would then give them four years of my life.