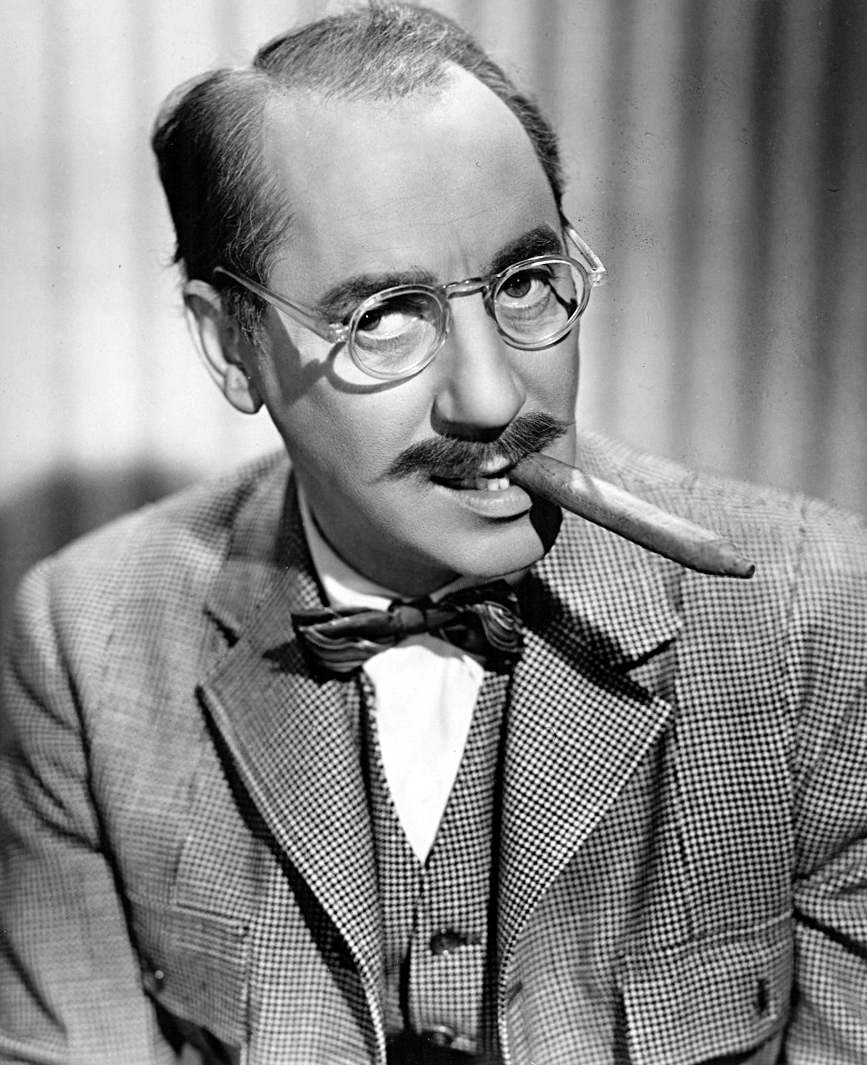 "Julius Henry" ""Groucho"" "Marx" was an American comedian and film and television star. He was known as a master of quick wit and widely considered one of the best comedians of the modern era. His rapid-fire, often impromptu delivery of innuendo-laden patter earned him many admirers and imitators.

He made 13 feature films with his siblings the Marx Brothers, of whom he was the third-born. He also had a successful solo career, most notably as the host of the radio and television game show You Bet Your Life.

His distinctive appearance, carried over from his days in vaudeville, included quirks such as an exaggerated stooped posture, glasses, cigar, and a thick wikt:greasepaint/greasepaint mustache and eyebrows. These exaggerated features resulted in the creation of one of the world's most ubiquitous and recognizable novelty disguises, known as "Groucho glasses": a one-piece mask consisting of horn-rimmed glasses, large plastic nose, bushy eyebrows and mustache.

If you enjoy these quotes, be sure to check out other famous comedians! More Groucho Marx on Wikipedia. 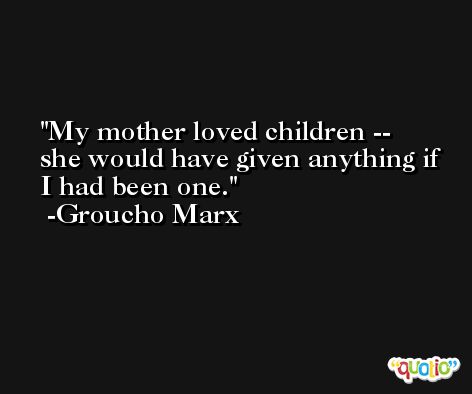 Age is not a particularly interesting subject. Anyone can get old. All you have to do is live long enough.

Well, art is art, isn't it? Still, on the other hand, water is water! And east is east and west is west and if you take cranberries and stew them like applesauce they taste much more like prunes than rhubarb does. Now, uh... Now you tell me what you know. 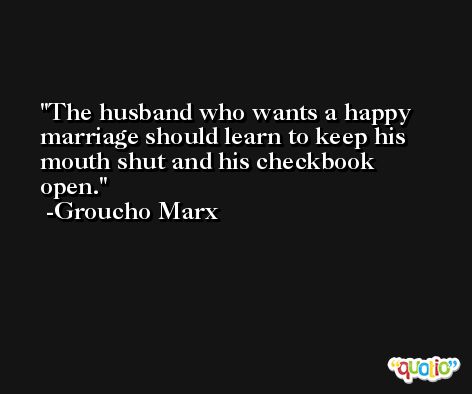 Here's to our girlfriends and wives; may they never meet! 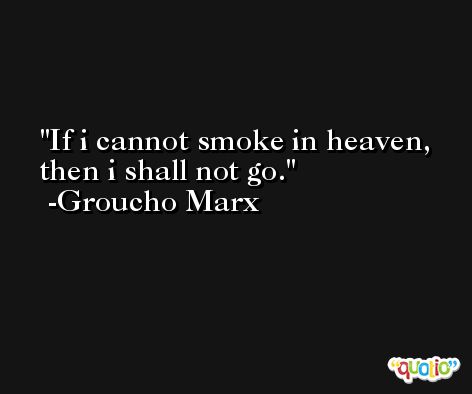 I find television very educating. Every time somebody turns on the set, I go into the other room and read a book.

I worked myself up from nothing to a state of extreme poverty. 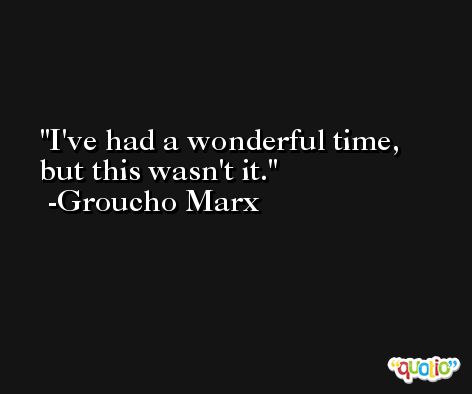 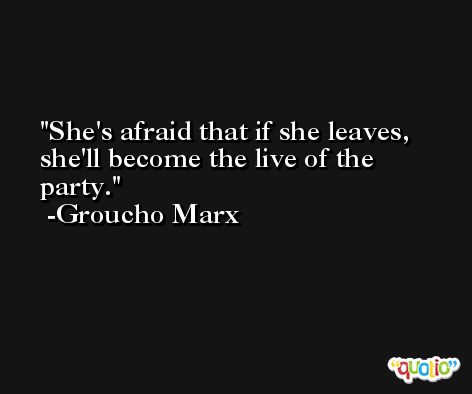 Anyone who says he can see through women is missing a lot.

Money frees you from doing things you dislike. Since I dislike doing nearly everything, money is handy. 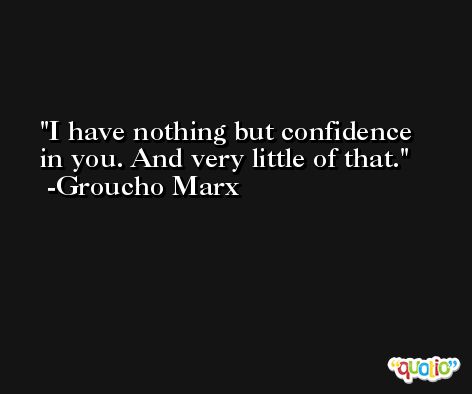 Q: What do you get when you cross an insomniac, an agnostic, and a dyslexic?A: Someone who stays up all night wondering if there is a Dog. 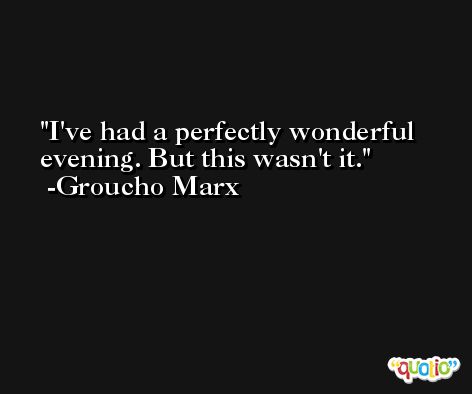 Those are my principles, and if you don't like them... well, I have others.

I aughta join a club and beat you over the head with it. 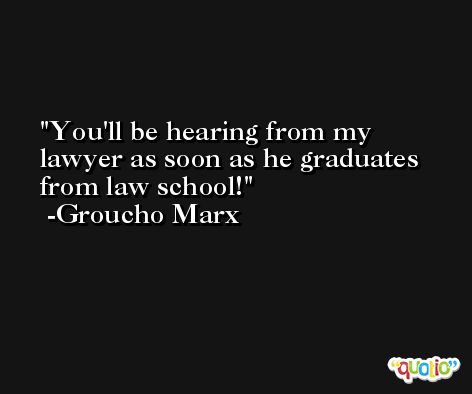 Paying alimony is like feeding hay to a dead horse.

Why should I do anything for posterity? What has posterity ever done for me? 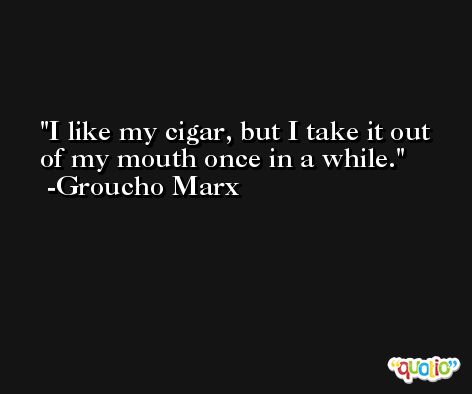 I never forget a face, but in your case I'll be glad to make an exception.

If you've heard this story before, don't stop me, because I'd like to hear it again. 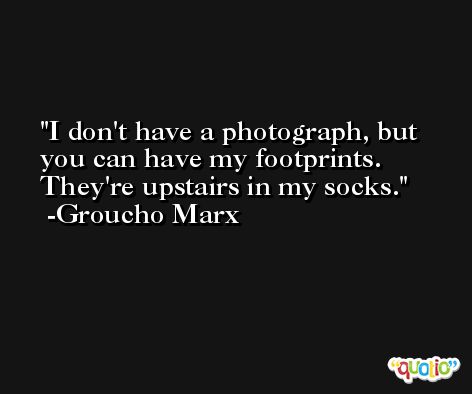