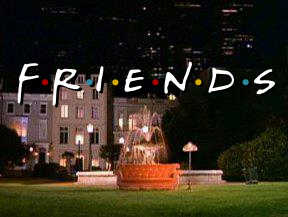 "Friends" is an American television sitcom created by David Crane (producer)/David Crane and Marta Kauffman, which originally aired on NBC from September 22, 1994, to May 6, 2004. It lasted ten seasons and is now in broadcast syndication/syndication. It revolves around a circle of friends living in Manhattan. The series was produced by Kevin S. Bright/Bright/Kauffman/Crane Productions, in association with Warner Bros. Television. The original executive producers were Kevin S. Bright, Marta Kauffman, and David Crane (producer)/David Crane.

Kauffman and Crane began developing Friends under the title Insomnia Cafe between November and December 1993. They presented the idea to Bright, and together they pitched a seven-page treatment of the show to NBC. After several script rewrites and changes, including a second title change to Friends Like Us, the series was finally named Friends.

Filming for the series took place at Warner Bros./Warner Bros. Studios in Burbank, California. The Last One (Friends)/The series finale, airing on May 6, 2004, was watched by around 52.5 million American viewers, making it the fourth most watched series finale in television history and the most watched episode of the decade.

Ross: First divorce: wife's hidden sexuality, not my fault. Second divorce: said the wrong name at the altar, kind of my fault. Third divorce: they shouldn't let you get married when you're that drunk and have stuff drawn all over your face, Nevada's fault.

Chandler [In response to a stupid comment]: You have to stop the Q-Tip when there's resistance.

[to Ross] Chandler: You know if your not careful, you could not get married at all this year.

Rachel: Oh my God. I've become my father. I've been trying so hard not to become my mother, I didn't see this coming.

Chandler: I'm not so good with the advice... Can I interest you in a sarcastic comment?

Phoebe : They don't know that we know they know we know.

Joey : Pheebs, you wanna help? Phoebe : Oh, I wish I could, but I really don't want to.