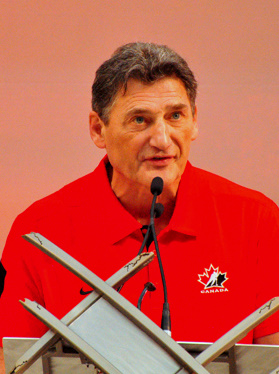 "Don Hay" is a Canadian former professional ice hockey player and National Hockey League head coach. He is the current head coach of the Kamloops Blazers of the WHL.

If we keep it under 25, obviously we're going to give him the opportunity to give us a chance to win games. We've really tried to limit our shots against and tried to have a lot of shots for, which means you're playing in the offensive zone a lot more than you're in the defensive zone.

We did what we had to do here. But Everett is very good at home, and they feed off their fans. We've been in some tough buildings before, but it will be a great challenge for us. You always have to wait until four games to see how you sit.

It's always great when Pat comes out and is around us. He's a real good resource guy to have watching your hockey club. Any time he can give us a little bit of advice, we're sure prepared to listen.

Those kids really play our system as well as anybody. By just playing the same way and Gilbert jumping on board, it really gave all three of them an opportunity to get the puck to the net.

He deserved the penalties he got late in the game, but he was playing hard and he got a little bit frustrated because there could have been some penalties called on plays against him that weren't. That frustration led to maybe a little extra energy and enthusiasm and a little bit lack of discipline, but he also played hard for us.

I don't think we're a dirty team. We're an honest team. We don't go out to hurt anybody.

A lot of it was Portland working very hard. They won the races, they won battles. We were just kind of standing around watching them. Our goalie (Dustin Slade), great performance by him.