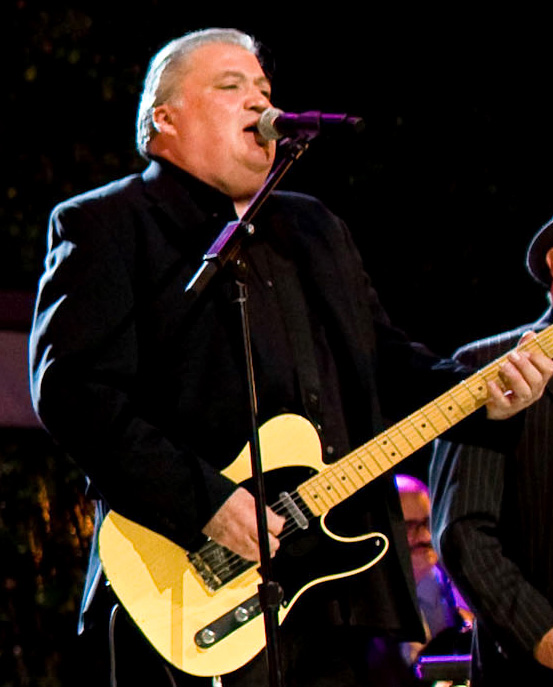 "David Kent Hidalgo" is an United States/American singer-songwriter, best known for his work with the band (music)/band Los Lobos. He is also a member of the supergroup (music)/supergroup Los Super Seven and of the Latin Playboys, a side project band made up of some of the members of Los Lobos. He formed another side project band with Mike Halby of Canned Heat, called Houndog. Most recently, he appeared on national television in the US backing Tom Waits.

Hidalgo's songs have been cover version/covered by the Jerry Garcia Band, Waylon Jennings, Bonnie Raitt and others. He has performed in Eric Clapton's Crossroads Guitar Festival since its inception in 2004, most recently in April 2013 at Madison Square Garden with Los Lobos. Eric Clapton joined the band on stage for their song "Burn It Down" off of their latest album, Tin Can Trust. His son, David Hidalgo, Jr. is the current drummer for Social Distortion.

In addition to his work with Los Lobos, Hidalgo frequently plays musical instruments such as accordion, violin, 6-string banjo, cello, requinto jarocho, percussion, Drum kit/drums and guitar as a session musician on other artists' releases.

It was the climate, and that's what we wanted to do, ... only when they didn't want us to understand what they were saying.

We haven't forgotten that, ... It's something we draw from always.

To find something comparable to that, but in our own culture, that was refreshing.

I knew how to get hold of Lalo, ... and Willie G, who used to be with the Midnighters - I gave Ry the numbers, and it worked out great, because Willie ended up writing a lot of the numbers with Ry, and singing a lot of it. And I played a little rhythm guitar on it, but not much.

It was kind of tongue-in-cheek, a goof-off to surprise our parents, ... But we couldn't play it. It became a challenge. You could compare it to country blues, or bluegrass - there's a tradition of form, a high standard of musicianship. That really attracted us.