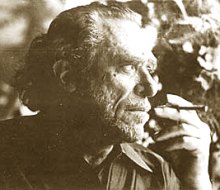 His writing was influenced by the social, cultural, and economic ambience of his home city of Los Angeles. His work addresses the ordinary lives of poor Americans, the act of writing, alcohol, relationships with women, and the drudgery of work. Bukowski wrote thousands of poems, hundreds of short stories and six novels, eventually publishing over sixty books. The Federal Bureau of Investigation/FBI kept a file on him as a result of his column, Notes of a Dirty Old Man, in the LA underground newspaper Open City.

In 1986 Time (magazine)/Time called Bukowski a "laureate of American lowlife". Regarding Bukowski's enduring popular appeal, Adam Kirsch of The New Yorker wrote, "the secret of Bukowski's appeal. . . [is that] he combines the confessional poet's promise of intimacy with the larger-than-life aplomb of a pulp magazine/pulp-fiction hero."

If you enjoy these quotes, be sure to check out other famous writers! More Charles Bukowski on Wikipedia.

If you're losing your soul and you know it, then you've still got a soul left to lose.

Some people never go crazy. What truly horrible lives they must lead.

Genius might be the ability to say a profound thing in a simple way.

An intellectual says a simple thing in a hard way. An artist says a hard thing in a simple way.

You begin saving the world by saving one man at a time; all else is grandiose romanticism or politics.

I don't hate people, I just feel better when they aren't around.

Sex is interesting, but it's not totally important. I mean it's not even as important (physically) as excretion. A man can go seventy years without a piece of ass, but he can die in a week without a bowel movement.

Of course it's possible to love a human being if you don't know them too well.

Sometimes you just have to pee in the sink.

There are worse things than being alone.