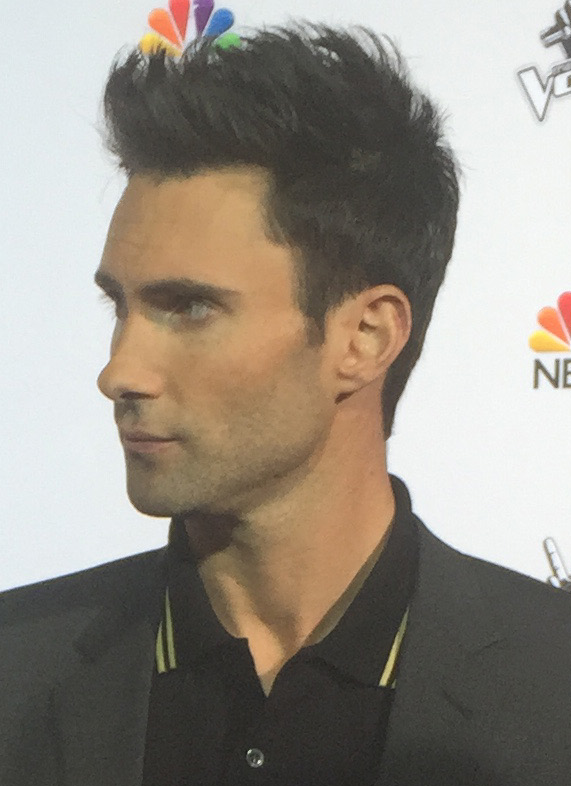 "Adam Noah Levine" is an American singer, songwriter, multi-instrumentalist, and actor. He is the lead vocalist for the Los Angeles pop rock band Maroon 5.

Born and raised in Los Angeles, California, Levine began his musical career in 1994, when he co-founded the alternative rock band Kara's Flowers, of which he was the lead vocalist and guitarist. The band split up after their only album, The Fourth World (album)/The Fourth World (released in 1997), which did not gain popularity. In 2001, the group was reformed – with guitarist James Valentine (musician)/James Valentine joining the line-up – and began a new, musical chapter, changing their name to Maroon 5. In 2002, the band released their first album, Songs About Jane, which went multi-platinum in the US. Since then, they have released four more albums, It Won't Be Soon Before Long (2007), Hands All Over (album)/Hands All Over (2010), Overexposed (album)/Overexposed (2012) and V (Maroon 5 album)/V (2014). As part of Maroon 5, Levine has received three Grammy Awards, two Billboard Music Awards, two American Music Awards, an MTV Video Music Award and a World Music Awards/World Music Award.

To be totally honest with you, I actually didn't meet them. Technically it wasn't so much of a collaboration because the song was written.

That he thinks, he believes he is dead.

It all sounded questionable. ... I just hope if it's a false accusation, that the amount of media attention focused on the players, the same amount of attention is put on their innocence.

I had to fight with myself 'cause he's so good, yet he's so popular.

I love those guys. They're crazy and fresh and interesting. And the s**t that they do is pretty unique.

All I needed to do was sing the lyrics that had already been written. I don't know those guys; they seem kind of kooky and crazy. I like their vibe.

You can't find anybody in Washington that doesn't like Katie. That's nearly impossible to do. I can say that was not the case for me. Everybody calls her and she takes everyone's call. I don't know how she does it. She figured a way to pack more hours into the day.