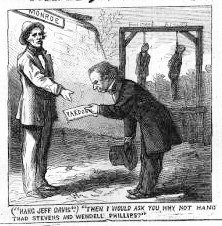 "Thaddeus Stevens" was a member of the United States House of Representatives from Pennsylvania and one of the leaders of the Radical Republican faction of the History of the United States Republican Party/Republican Party during the 1860s. A fierce opponent of slavery and discrimination against African-Americans, Stevens sought to secure their rights during Reconstruction Era/Reconstruction, in opposition to President Andrew Johnson. As chairman of the House Ways and Means Committee during the American Civil War, he played a major part in the war's financing.

If you enjoy these quotes, be sure to check out other famous politicians! More Thaddeus Stevens on Wikipedia.

Strip the proud nobility of their bloated estates, reduce them to a level with plain republicans, send forth to labor, and teach their children to enter the workshops or handle the plow, and you will thus humble proud traitors.