"Taslima Nasrin" is a Bangladeshi author and former physician who has lived in exile since 1994. From a literary profile as a poet in the late 1980s, she rose to global fame by the end of the 20th century owing to her essays and novels with feminist views and criticism of religion.

Since leaving Bangladesh in 1994 on account of threat calls, she has lived in many countries; for eight years after she was forced to flee the Indian state of West Bengal she lived in New Delhi, now she has been relocated to US after death threats by islamic radicals In 2015 she was threatened with death by Al Qaeda-linked extremists, and so the Center for Inquiry assisted her in traveling to the United States, where she now lives.

She advocates secular humanism, freedom of thought, gender equality, and human rights by publishing, lecturing, and campaigning.. She has been unable to return either to her home in Bangladesh (since 1994) or to her adopted home in Bengali-speaking West Bengal in India (since 2008)

If you enjoy these quotes, be sure to check out other famous writers! More Taslima Nasrin on Wikipedia.

The fundamentalists are increasing. People, afraid to oppose those fundamentalists, shut their mouths. It is really very difficult to make people move against a sensitive issue like religion, which is the source of fundamentalism.

I write against the religion because if women want to live like human beings, they will have to live outside the religion and Islamic law. 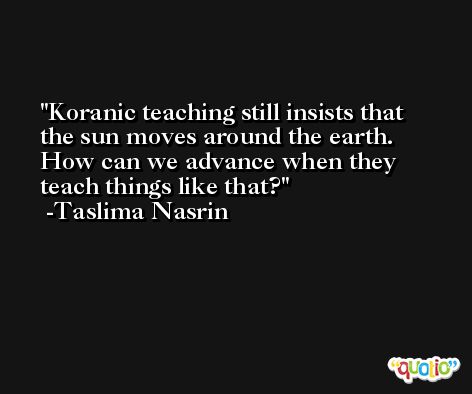 I believe that if the silent majority were to protest against those who believe in irrational blind faith - who want to go backwards instead of forward, who are for tradition not innovation, who oppose individualism and plurality of thought - then the world would become a truly civilized world in which to live. 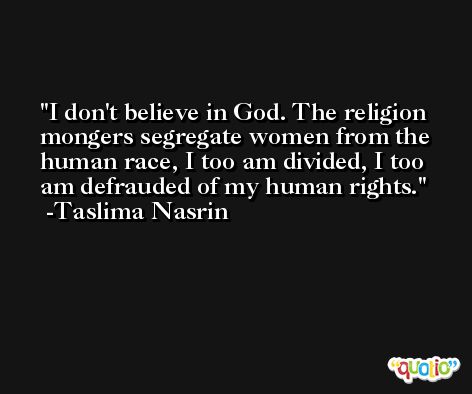 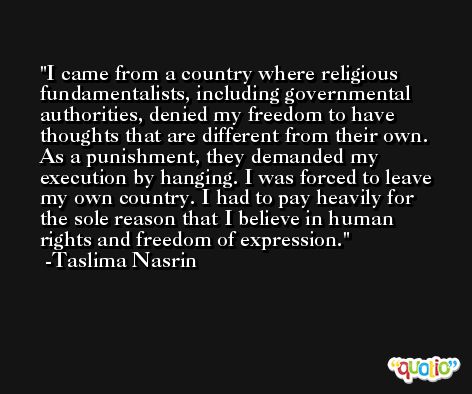