"Stephen Gallagher" is an England/English writer.

Gallagher was born in Salford, Greater Manchester. He has written several novels and television scripts, including for the BBC television series Doctor Who — for which he wrote two serials, Warriors' Gate (1981) and Terminus (Doctor Who)/Terminus (1983)—as well as for the series Rosemary & Thyme and Bugs (TV series)/Bugs, for two seasons of which he was script consultant along with Brian Clemens. He adapted his own novel Chimera for ITV Network/ITV and directed the adaptation of Oktober as well as writing the feature-length episode The Kingdom of Bones for the BBC series Murder Rooms.

He also developed and wrote a science-based series for ITV Network/ITV, Eleventh Hour (UK TV series)/Eleventh Hour, starring Patrick Stewart as a government science investigator and advisor. The programme was rumoured to be ITV's answer to the new series of Doctor Who, but was more in the tradition of the hard-science thriller. Gallagher's series format was acquired for a Eleventh Hour (U.S. TV series)/US television remake by the CSI: Crime Scene Investigation/CSI trio of CBS, Jerry Bruckheimer TV and director Danny Cannon. The series aired on CBS and starred Rufus Sewell and Marley Shelton.

It may be even more that one (rate hike). If they move once there is always another chance for another one, but I think the message that we got from Greenspan today is that it will not be an aggressive increase in rates.

Once the auto surge plays out, we should see a pickup in spending on other items. 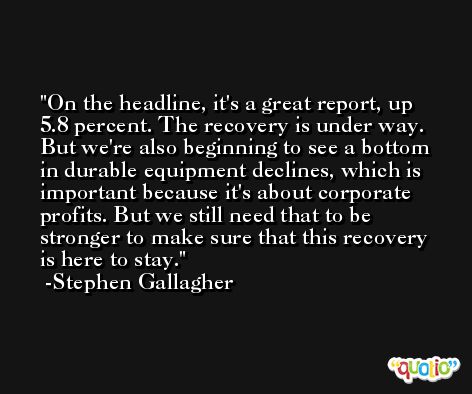 This may be a natural reaction to the war, but the losses are deep and spell increasing trouble for the economy if uncertainties do not lift very quickly.

It's pretty much all due to autos. We got a solid rebound in auto sales last month due to the new discounts put in place in mid-November. 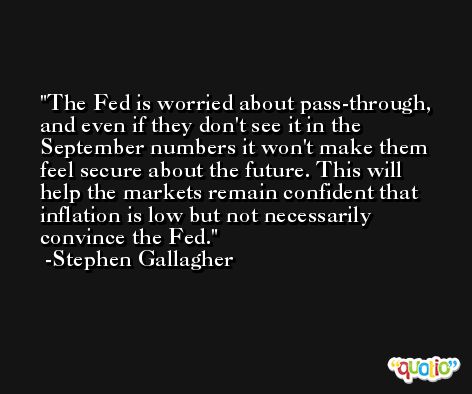 Businesses have been through a lot over the last few years, and many of them don't have a great deal of tolerance for uncertainty.

We're seeing a reduced impact from the hurricanes and we're getting back to the underlying norm. We're looking for about an 80,000 increase in non-farm payrolls in October, and it's still picking up. 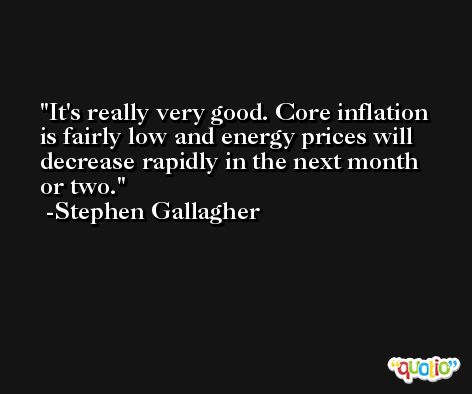