"Stephen David Daldry", Commander of the Order of the British Empire/CBE is an English director and producer of both film and theatre. He has won the Tony Award for his work on Broadway, and has directed several feature films that have been nominated for Academy Award for Best Director/Best Director and/or Academy Award for Best Picture/Best Picture at the Academy Awards. These films are Billy Elliot (2000), The Hours (film)/The Hours (2002), The Reader (2008 film)/The Reader (2008) and Extremely Loud and Incredibly Close (film)/Extremely Loud and Incredibly Close (2011).

We thought we might go to Canada first, but we're not now. I think I might bring it in in 2008. 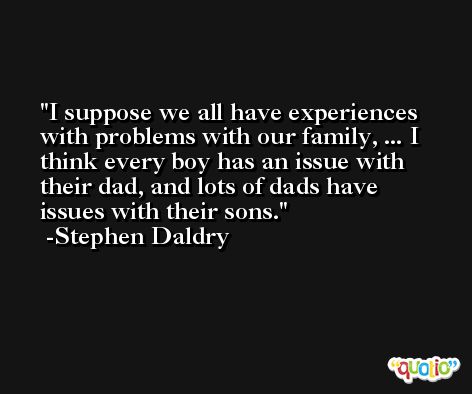 Most of the miners that you see in the movie were actual miners that live in that town or in villages nearby.

The Royal Court has been at the centre of British cultural life for the past 50 years ... I think the fact that it's managed to maintain its position over 50 years is an extraordinary achievement.