"Simeon Strunsky, A.B." was a Jewish American essayist, born in Vitsebsk/Vitebsk, Russian Empire (present day Belarus). His parents are Isidor S. and Perl Wainstein. He graduated from Columbia University in 1900. He was a department editor of the New International Encyclopedia from 1900 to 1906, editorial writer on the New York City/New York Evening Post from 1906 to 1913, and subsequently was literary editor of that paper until 1920. His columns also appeared in Atlantic Monthly, The Bookman (New York)/Bookman, Collier's, and Harper's Weekly. He wrote:

* Through the Outlooking Glass with Theodore Roosevelt (1912)

* Belshazzar Court, or Village Life in New York City (1914): "The simplicity and kindliness of human nature...in the complexities of the modern city".

He joined the New York Times in 1924 and was on staff until his death in Princeton, New Jersey after three months of hospitalization. He was married to Socialist activist Manya Gordon; they had a son and a daughter. He had a son, Robert Strunsky, by his first wife, Rebecca Slobodkin (d. 1906).

If you enjoy these quotes, be sure to check out other famous writers! More Simeon Strunsky on Wikipedia.

People who want to understand democracy should spend less time in the library with Aristotle and more time on the buses and in the subway. 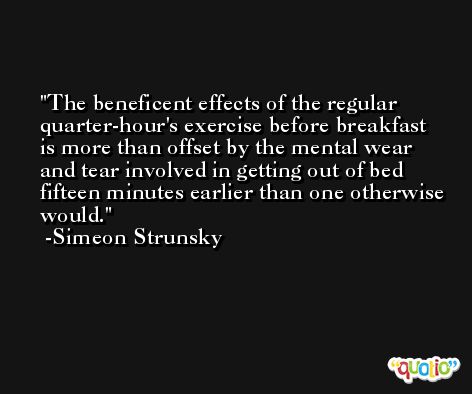