"Shintaro Ishihara"/?? ???/Ishihara Shintar?/born September 30, 1932}} is a Japanese politician, supreme advisor of Party for Future Generations and author who was Governor of Tokyo from 1999 to 2012.

His arts career included a prize-winning novel, best-sellers and work also in theater, film and journalism. His 1989 book, The Japan That Can Say No, co-authored with Sony chairman Akio Morita, called on the authors' countrymen to stand up to the United States.

After an early career in the arts, he served for more than 25 years in the Parliament, leaving after the Tokyo subway attack in 1995. He subsequently served as Governor of Tokyo from April 1999 to October 2012, resigning to briefly co-lead the Sunrise Party, and then the Japan Restoration Party. He was elected to the Japanese lower house in the Japanese general election, 2012/2012 general election, but lost two years later, and officially left politics.

If you enjoy these quotes, be sure to check out other famous politicians! More Shintaro Ishihara on Wikipedia.

If the Olympics are going to be hosted in Japan, it has to be Tokyo, considering the capacity. 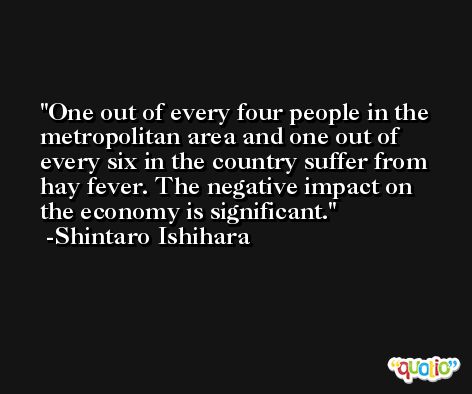 Part of her must feel carefree, relieved, now that she has left the imperial family and become a commoner. I want to set up an opportunity so that she can get a taste of this.