"Sharon Lewis" is a Canada/Canadian television personality from Toronto. She studied political science at the University of Toronto. She was an actress and author before being the host of CounterSpin (television program)/counterSpin on CBC Television in 2001, and then hosted ZeD, also for the Canadian Broadcasting Corporation. She began her career on counterSpin with a special on the September 11, 2001 attacks. She called herself an "activist," saying "It's a journalist's job to activate change through information... Who isn't passionate and is in the journalist field, otherwise I don't know what would drive you?"

According to the Toronto Star, in 2001 Lewis initially seemed "mousy and ill-informed" on counterSpin, but survived. A television critic also said that on ZeD Lewis was nicely easygoing. After leaving ZeD, Ziya Tong took over as host. Lewis established the company urbansoul inc., which promotes the art of minority women.

If you enjoy these quotes, be sure to check out other famous politicians! More Sharon Lewis on Wikipedia.

They can relieve a lot of distraction for the teachers.

I've been through quite a bit, but the sun hasn't gone down on me yet. I'm still clicking, still trucking. 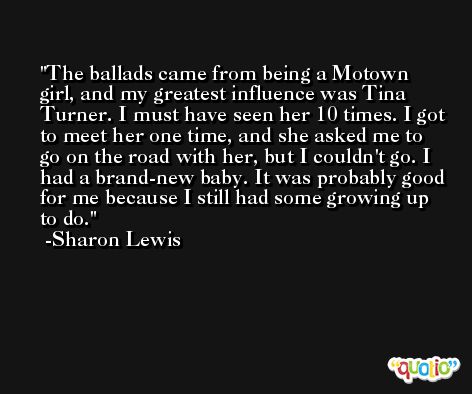 I could sing before I could talk, Everything's Gonna Be Alright.

In the four years of our involvement with the development of this park, we have observed that no planning applications have been submitted for industrial purposes or so-called long-term career-oriented employment.