"Savitri Devi Mukherji" was the pseudonym of the Greeks/Greek-France/French writer "Maximiani Portas", a prominent proponent of animal rights, deep ecology and Nazism, who served the Axis powers/Axis cause during World War II by espionage/spying on Allies of World War II/Allied forces in India. She wrote about animal rights movements and was a leading member of the Nazi underground during the 1960s.

If you enjoy these quotes, be sure to check out other famous writers! More Savitri Devi on Wikipedia.

Recalling some of the most spectacular horrors of history -- the burning of heretics and witches at the stake, the wholesale massacre of "heathens," and other no less repulsive manifestations of Christian civilization in Europe and elsewhere -- modern man is filled with pride in the "progress" accomplished, in one line at least, since the end of the dark ages of religious fanaticism. 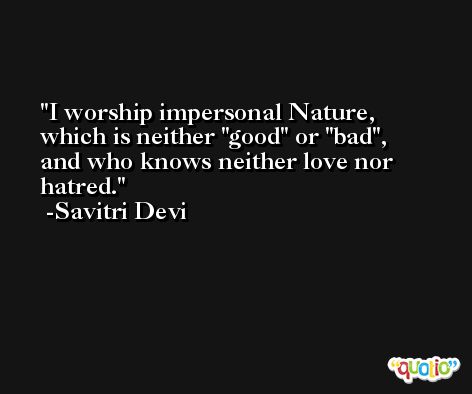 If there is a single fact which anyone who seriously studies the history of Christianity cannot help but be struck by, it is the almost complete absence of documents regarding the man whose name this great international religion bears -- Jesus Christ. We know of him only what is told to us in the New Testament gospels, that is, practically nothing.

Whether Hindus or Greeks, Egyptians or Japanese, Chinese, Sumerians, or ancient Americans -- or even Romans, the most "modern" among people of antiquity -- they all placed the Golden Age, the Age of Truth, the rule of Kronos or of Ra or of any other gods on earth -- the glorious beginning of the slow, downward unfurling of history, whatever name it be given -- far behind them in the past. 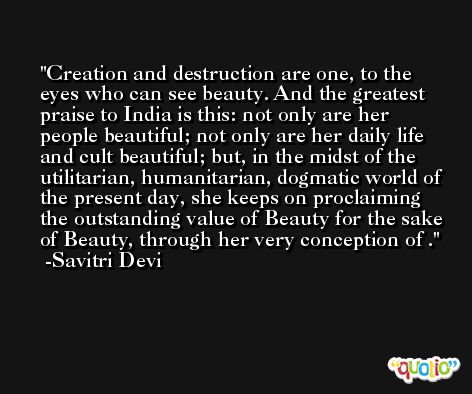 I believe in the Law of everlasting struggle, which is the law of life, and in the duty of the best specimens of our race - the natural 'lite of mankind - to rule the earth, and evolve out of themselves a caste of supermen, a people 'like unto the Gods'.