"Russell Sherman" is an American classical pianist, educator and author.

Russell Sherman made his debut at The Town Hall in New York at age 15, later studying piano with Edward Steuermann and composition with Erich Itor Kahn. Sherman has performed as a piano soloist with the New York Philharmonic, the Los Angeles Philharmonic, the Boston Symphony Orchestra, the Chicago Symphony Orchestra, and the Philadelphia Orchestra. He has performed in recital throughout the United States, Europe, South America, and the former Soviet Union.

He is currently artist-in-residence at New England Conservatory, where over thirty years ago he met and instructed Wha Kyung Byun, a woman who later became a well-known piano instructor herself as well as his wife.

We are in active discussions with them regarding alternative arrangements. In any event, Bear Stearns remains committed to the energy trading sector, and we intend to continue expanding our presence in the market. 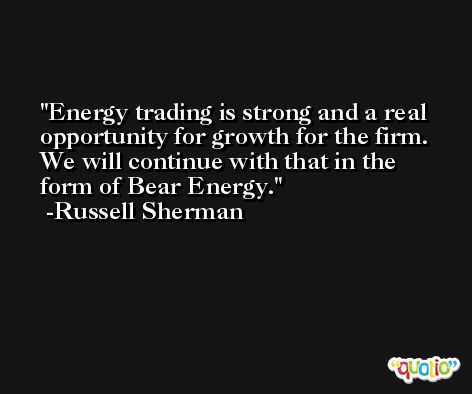