"Ronald L. Rice" is an American Democratic Party (United States)/Democratic Party politician, who has served in the New Jersey New Jersey Senate/State Senate since 1986, where he represents the New Jersey Legislative Districts, 2011 apportionment#District 28/28th Legislative District. While serving in the Senate, Rice has held a variety of different leadership roles including Associate Minority Leader (1998-2001), Assistant Deputy Minority Leader (1994-1997), and Assistant Majority Leader (1990-1991). His son, Ronald C. Rice, is a city councilman in Newark, New Jersey. He is the fourth-most senior senator in the state, behind Richard Codey, Gerald Cardinale, and Raymond Lesniak.

The members appointed to the Gangland Security Task Force will bring their knowledge and expertise in various fields from counseling to law enforcement. It?s the diversity of the task force that will give us extensive information on the gang infrastructure and allow for the formation of a comprehensive plan to eliminate gangs.

That's a subject you always feel somewhat uncomfortable with, especially if you have your own religious base. 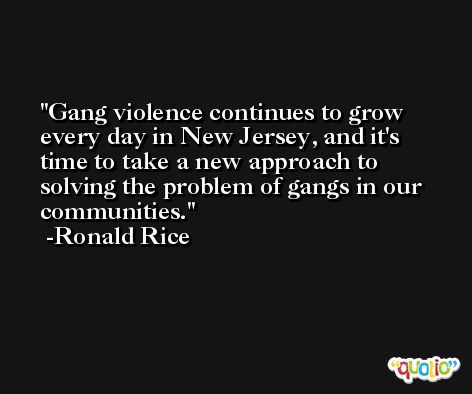