"Roddy Doyle" is an Irish novelist, dramatist and screenwriter. He is the author of ten novels for adults, seven books for children, seven plays and screenplays, and dozens of short stories. Several of his books have been made into films, beginning with The Commitments (film)/The Commitments in 1991. Doyle's work is set primarily in Ireland, especially working-class Dublin, and is notable for its heavy use of dialogue written in slang and Irish English dialect. Doyle was awarded the Man Booker Prize/Booker Prize in 1993 for his novel Paddy Clarke Ha Ha Ha.

If you enjoy these quotes, be sure to check out other famous novelists! More Roddy Doyle on Wikipedia.

Ulysses could have done with a good editor. You know people are always putting Ulysses in the top 10 books ever written but I doubt that any of those people were really moved by it.

If you're a writer in Dublin and you write a snatch of dialogue, everyone thinks you lifted it from Joyce. The whole idea that he owns language as it is spoken in Dublin is a nonsense. He didn't invent the Dublin accent. It's as if you're encroaching on his area or it's a given that he's on your shoulder. It gets on my nerves. 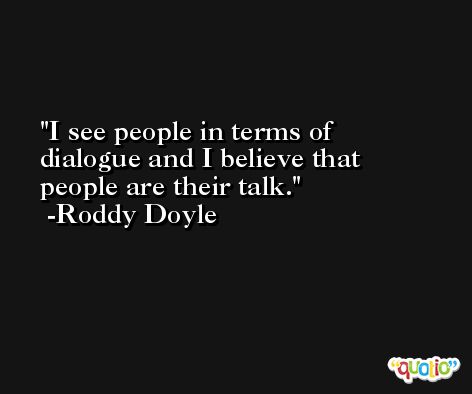 It's a big con job. We have sold the myth of Dublin as a sexy place incredibly well; because it is a dreary little dump most of the time.