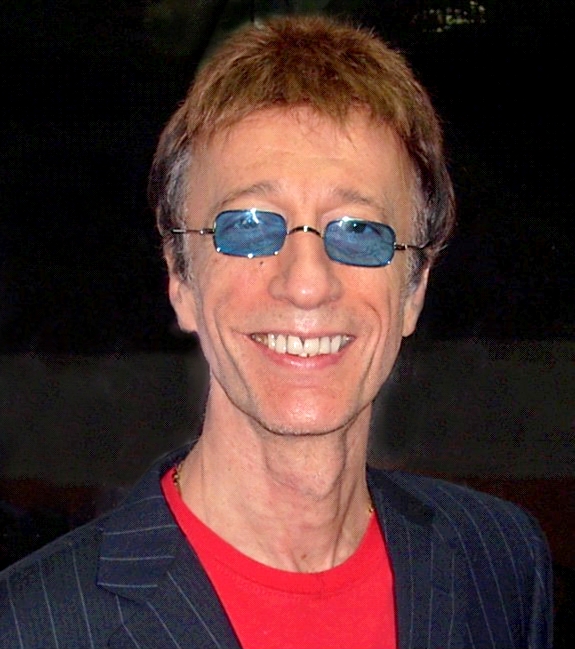 "Robin Hugh Gibb", was a singer, songwriter and record producer, best known as a member of the Bee Gees. He gained worldwide fame with his brothers Barry Gibb/Barry and Maurice Gibb. Besides, their younger brother Andy Gibb/Andy was also a singer. Gibb joined his first band The Rattlesnakes (1955 band)/the Rattlesnakes which formed in Manchester, England.

Gibb was born on the Isle of Man to English parents, Hugh Gibb/Hugh and Barbara Gibb; the family later moved to Manchester (where Andy was born) before settling in Redcliffe, Queensland/Redcliffe, a suburb of Brisbane, Australia. Gibb began his career as part of the family trio (Barry-Maurice-Robin). When the group found their first success, they returned to England where they achieved worldwide fame. In 2002, the Bee Gees were appointed as Commander of the Most Excellent Order of the British Empire/CBEs for their "contribution to music", however investiture at Buckingham Palace was delayed until 2004.

If you enjoy these quotes, be sure to check out other famous musicians! More Robin Gibb on Wikipedia.

I find it very, very hard. He was part of the fabric of my life. We were kids together, and teenagers. We spent the whole of our lives with each other because of our music.

We said we'd fly the flag without him and carry on. I didn't give him a kiss because I still hadn't accepted what was happening. I was hoping that some miracle was going to happen. Of course, it didn't. I wish I had kissed him now. 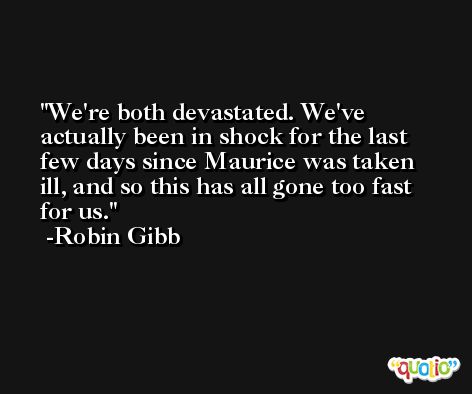 I'll never get used to living without Mo, but the painful things that surround what happened to him aren't so painful any more-not so raw or so new.

One morning I'd woken up about 4 a.m., feeling nauseous. The feeling lasted about an hour. It was at the time Maurice was in hospital with pains in his stomach. It was probably some indication that something was wrong, because I have never, ever had that feeling before. 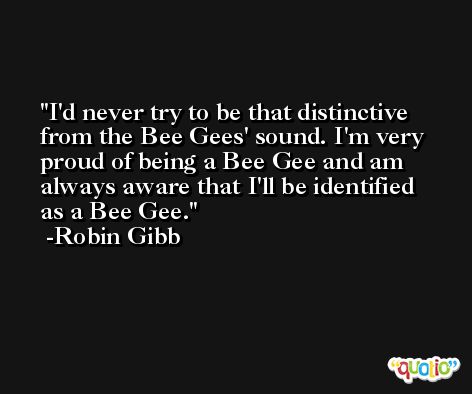 In the beginning, Barry and I couldn't decide if we were going got go forward with the name of the Bee Gees or just as Barry and Robin. Now we've decided to continue as the Bee Gees because we feel we can, and Maurice would have wanted it.

You're looking at the Bee Gees right now. 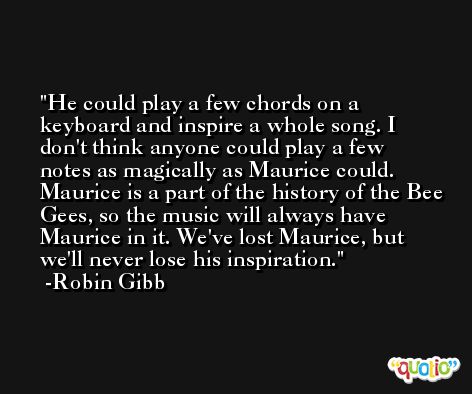