"Robert Hurwitz" has been president of Nonesuch Records since 1984. He previously ran the American operations of ECM Records, after beginning his career at Columbia Records. Hurwitz grew up in Los Angeles, where he was trained as a pianist, then went on to study at the University of California, Berkeley.

Founded as a classical label in 1964, Nonesuch expanded into the world music field in 1967 with its Explorer series. Since Hurwitz became head of the company, it has further expanded its mission to include artists from a wide range of musical genres, including jazz, musical theater, folk, bluegrass, and rock.

We don't see the festival as an end-point for these shows, ... It's a launching pad, a stepping stone for productions.

It allows for Tony winners and other people with limited availability to take part. 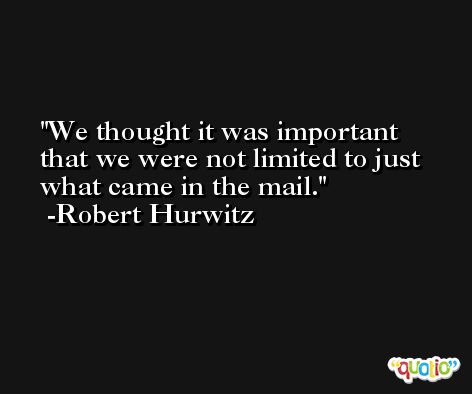 [As nice as it is to imagine future Tony Award winners getting their start at NYMF,] the goal isn't to make it about the commercial future, ... One of our goals was to amplify the work that writers and musical theatre organizations are doing.