"Eric Hilliard Nelson" – known as "Ricky Nelson", later also as "Rick Nelson" – was an United States/American actor, musician and singer-songwriter. He starred alongside his family in the television series, The Adventures of Ozzie and Harriet (1952–66), as well as co-starring alongside John Wayne and Dean Martin in Howard Hawks/Howard Hawks's Western (genre)/western feature film, Rio Bravo (film)/Rio Bravo (1959). He placed 53 songs on the Billboard Hot 100/Billboard Hot 100 between 1957 and 1973 including "Poor Little Fool" which holds the distinction of being the first #1 song on Billboard (magazine)/Billboard magazine's then-newly created Billboard Hot 100/Hot 100 chart. He recorded 19 additional Top 10 hits and was inducted into the Rock and Roll Hall of Fame on January 21, 1987. In 1996, he was ranked #49 on TV Guide's 50 Greatest TV Stars of All Time.

If you enjoy these quotes, be sure to check out other famous musicians! More Ricky Nelson on Wikipedia.

To reminisce with my old friends, a chance to share some memories, and play our songs again.

I don't mess around, boy. 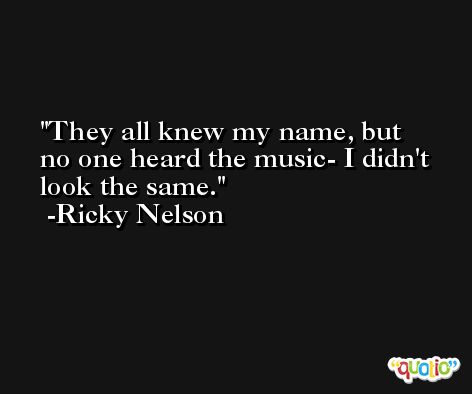 Just believe in what you're doing, and keep doing it.