"George Richard "Rick" Wagoner, Jr." is an American businessman and former Chairman of the board/Chairman and Chief Executive Officer of General Motors Corporation/General Motors. Wagoner resigned as Chairman and CEO at General Motors on March 29, 2009, at the request of the White House. The latter part of Wagoner's tenure as CEO of General Motors found him under heavy criticism as the market valuation of GM went down by more than 90% and the company lost more than $82 billion USD. This led to his being named one of the worst CEOs of 2008.

If you enjoy these quotes, be sure to check out other famous businessmen! More Rick Wagoner on Wikipedia.

I remember very clearly at the first budget review having a pretty direct conversation with the head of manufacturing... We began to get huge improvements in productivity and responsiveness. I got a chance to see that firsthand. 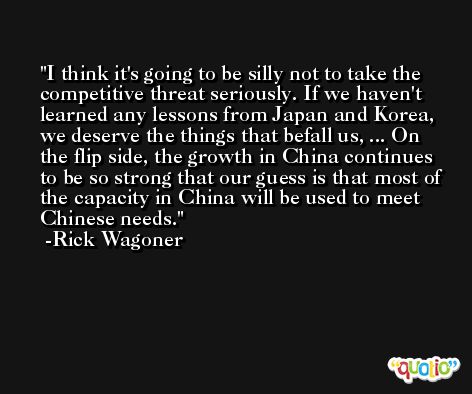 History shows you don't know what the future brings.

All of our business units except GM North America are on or above track, and that has the extreme attention of us all. Progress is moving in the right direction ... but we still have more work to do. 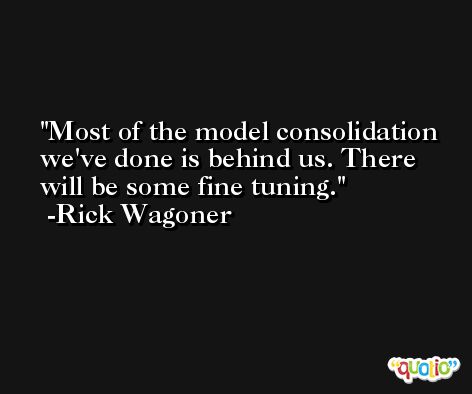 If you look from 1992 to 1997, we've really reduced the number of car models from more than 100 to about 81. Our strategy is to have the right number of products. Segment the brands better. There's a lot of work being done on the distribution side of the business. And the data's showing that our new products are doing a very decent job in the market.

We've been able to use NAFTA. We import a lot more products to fill niches. We don't have to assemble them locally. We've consolidated a lot around pickup trucks. Rather than build everything to sell in Mexico, you can ship finished products back and forth. You get the production efficiencies of scale. 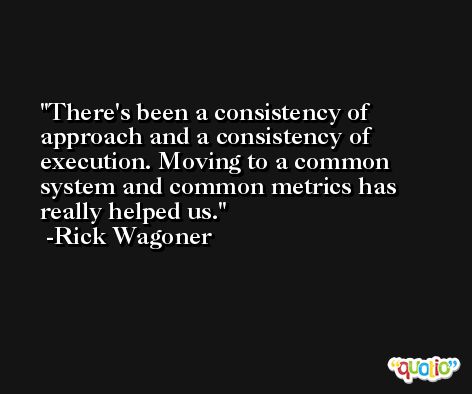