"Richard Clarence Dudley" is currently an assistant general manager for the Montreal Canadiens and former player. Dudley was previously the general manager of several hockey teams. Dudley played in the World Hockey Association and in the National Hockey League. Dudley has also served as a head coach in the National Hockey League. Dudley grew up playing hockey in his hometown of Port Credit, Ontario.

He played a brilliant game. We were able to at least salvage two points for him. Let's face the facts: If he doesn't play like he does for 40 minutes, we're nowhere near that game. We know it. Everybody knows it.

You can't trade for a 20-goal scorer without giving up a lot in return, so you try to find players like that when they're coming up.

Brad said he'd take him on his team anytime. That was good enough for me. 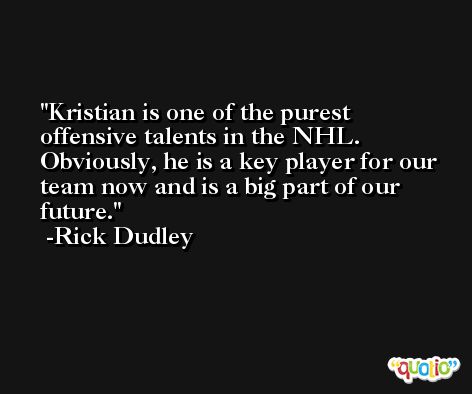 We are pretty excited about some of the young kids we have coming in like Horton and Stewart. Horton is big, he's fast, he's got good hands and he has a great deal of grit. You look at that you say maybe a kid like that could play. It won't be size and it won't be speed that stops those two kids from playing. We believe we had one of the better drafts in one of the deepest drafts in recent memory.