"Richard "Richie" Benaud", Order of the British Empire/OBE, is a former Australian people/Australian cricketer who, since his retirement from international cricket in 1964, has become a highly regarded commentator on the game.

Benaud was a Test cricket all-rounder, blending thoughtful leg spin bowling with lower-order batting aggression. Along with fellow bowling all-rounder Alan Davidson (cricketer)/Alan Davidson, he helped restore Australia to the top of world cricket in the late 1950s and early 1960s after a slump in the early 1950s. In 1958 he became Australian national cricket captains/Australia's Test captain until his retirement in 1964.

Gideon Haigh described him as "... perhaps the most influential cricketer and cricket personality since the Second World War." In his review of Benaud's autobiography Anything But, Sri Lankan cricket writer Harold de Andrado wrote: "Richie Benaud possibly next to Sir Don Bradman has been one of the greatest cricketing personalities as player, researcher, writer, critic, author, organiser, adviser and student of the game."

If you enjoy these quotes, be sure to check out other famous athletes! More Richie Benaud on Wikipedia.

I've been picking around with the game now for some time, but I've never seen anything like this -.

The slow-motion replay doesn't show how fast the ball was really travelling. 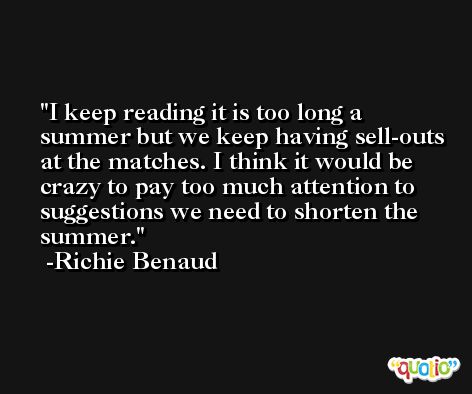 He looked at me for a long time and just turned and said 'Thanks', though whether that's 'Thanks, but no thanks' or 'Thanks, thanks', I don't know.

He's usually a good puller - but he couldn't get it up that time. 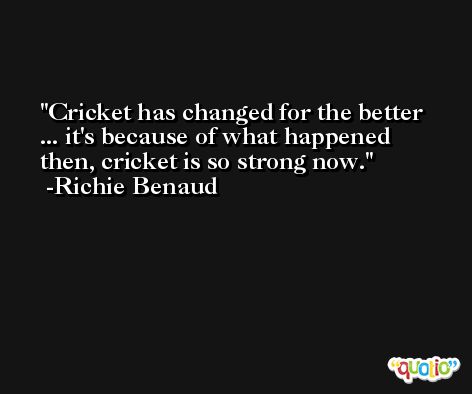 We first met during the formation of World Series cricket. There was never anything mundane or orthodox about him. At the meeting I had with him, the thing that struck me most was that he was concerned only with the players. It was his job to put (the poor state of cricket) right, and put it right he did. He was absolutely brilliant. 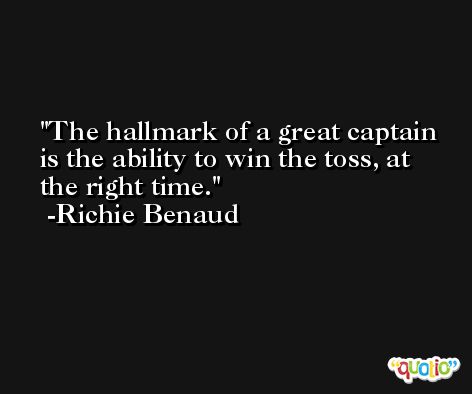