"Richard Migliore" (born March 14, 1964 in Babylon (village), New York/Babylon, New York) is a retired American jockey. He now works as a racing analyst for HRTV (network)/HRTV, New York Racing Association and Fox Sports 1. He was nicknamed "The Mig," which is a type of Russian fighter jet, for his tenacious style of riding. He lives with his wife, Carmela, and children in Millbrook, New York.

I think it's a testament to the athlete the horse is, and the training his trainer has put into him. I just think he's made him aerobically a more flexible, tougher athlete with the regimen he goes through.

It was an honor to be in this race with him. I also had to privilege to ride everyday in New York with him early in my career. There will never be another jockey with the passion and the love for the game like Angel has. 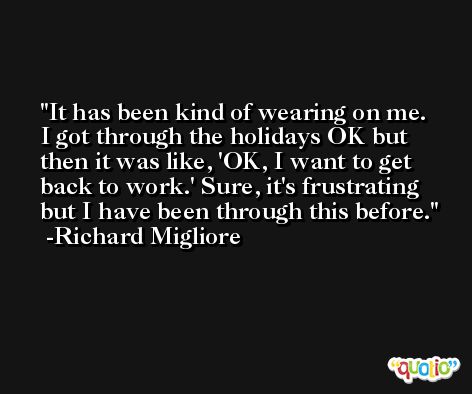 He's actually a horse who is better running faster than rating. He doesn't really change gears. If he comes out fast, he'll maintain his speed. If you go :23, he's not the kind who will finish with them. I've ridden him over the last three or four years and, every time I ride him, I just let him rock. He broke today like a scalded cat.

Obviously, he's done a lot right his first three starts, and this is a big step up. I think he's earned his right to compete with them. Now let's see if he can do it. 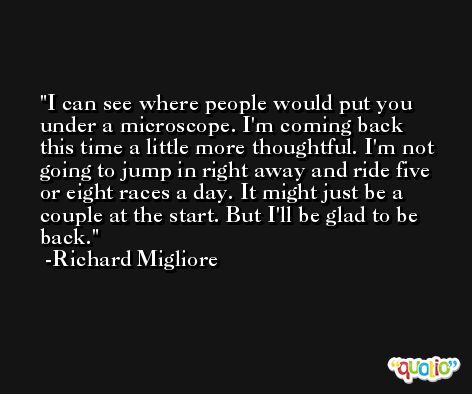 He ran a fantastic race. Blood and guts all the way to the wire. He's a fantastic racehorse. I wasn't looking for the lead, but my horse was keen and I didn't want to get into a fight with him. When he got alone, he idled better and when company joined him, he fought on again. It was a very game performance.