Originally from SANFL club Woodville Football Club/Woodville, Champion was a high draft pick by the Brisbane Bears in 1988 VFL Draft, but did not move to Brisbane until the 1991 AFL season.

A solidly built and tough backman, Champion wore the number 1 guernsey for Brisbane and was a Bears stalwart through some of the club's darkest years, and a poster player in an era when the club had so few.

When the club moved from Carrara on the Gold Coast, Queensland/Gold Coast, growing their fanbase, Champion became a cult figure. He was endeared by Bears fans, was Best Clubman several times and became a local celebrity with his Jimmy Barnes impressions. He was a media figure for the club. He even made an appearance with John Platten to represent the Australian Football League/AFL on the television show Gladiators Australia/Gladiators.

We've entered a lull again, with tech issues drifting lower on the back of the slowdown in mobile sales.

We still have got some serious fundamental problems in the global economy and it's going to be difficult for the market to move ahead consistently without solving them. 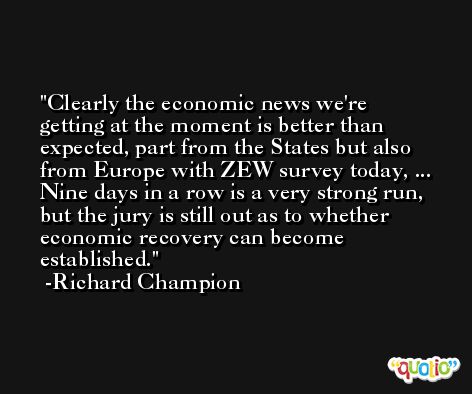 For the time being I would characterize this as a savage, bear market rally.

The lack of follow-through by the ECB after the Fed rate cut was a real blow. It seems we must continue to lean on the U.S. consumer, who may well be flagging.