With an educational background in engineering and business, Pinkett is both a Rhodes Scholar and a Walter Byers Scholar, holding five academic degrees. Before entering the reality show, Pinkett had already established a career in business, and had become co-founder of business consulting firm BCT Partners in 2001. As winner of the fourth season in December 2005, Pinkett undertook a yearlong apprenticeship with Trump Entertainment Resorts in Atlantic City, New Jersey.

After The Apprentice, Pinkett has continued as chairman and CEO of BCT Partners, while also acting as a public speaker and appearing on later editions of the show, and on CEO Exchange, and also entering politics.

If you enjoy these quotes, be sure to check out other famous musicians! More Randal Pinkett on Wikipedia.

There's always a certain responsibility . . . to really represent the African-American community, and to be the kind of role model and figurehead or celebrity that the community can be proud of.

Seventy percent of the traffic to the hotel casino comes through that area. 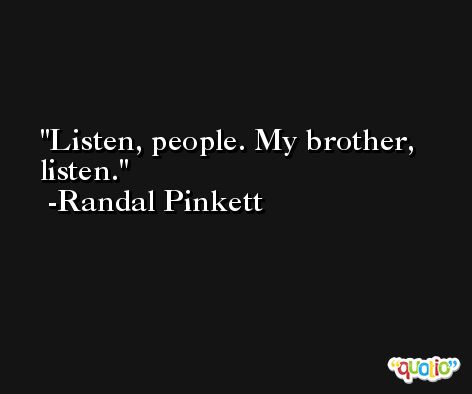 There is one and only one apprentice. And if you're going to hire someone tonight, it should be one (person only).