"Ramiro Mendoza", nicknamed ""El Brujo"" (The Witch Doctor), is a former Major League Baseball pitcher. Mendoza played with the New York Yankees (1996–2002, 2005) and Boston Red Sox (2003–04). He batted and threw right-handed. Although Mendoza made 62 starts in his major league career, he was primarily known as a middle relief pitcher. He threw a Sinker (baseball)/sinker along with a slider, a four-seam fastball and a changeup. In Mendoza's ten seasons in the Major Leagues he was a part of five World Series champion teams.

It's important for me to be here so they can see me.

It's kind of a mess. But I wouldn't have played anyway. 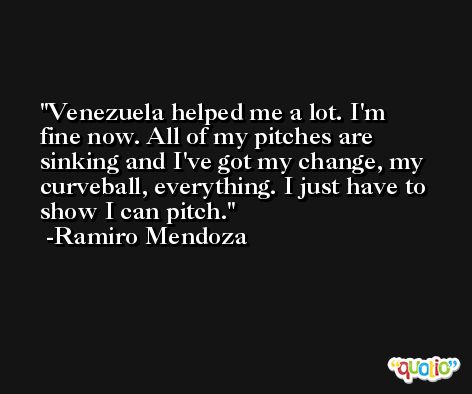 It really helped me. I feel better than last year.