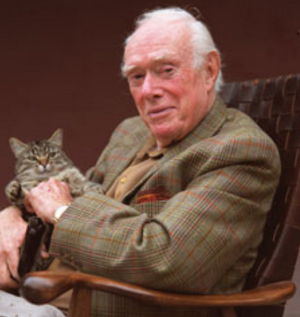 "Pierre Francis de Marigny Berton", was a noted Canadian author of non-fiction, especially Canadiana and Canadian history, and was a well-known television personality and journalist.

An accomplished storyteller, Berton was one of Canada's most prolific and popular authors. He wrote on popular culture, Canadian history, critiques of mainstream religion, anthologies, children's books and historical works for youth. He was also a founder of the Writers' Trust of Canada, a non-profit literary organization that seeks to encourage Canada's writing community. Berton's 50 books became popular because his light and fast-paced style was not weighted down by footnotes or deep probes into primary sources. Historian C.P. Stacey in 1980, said Berton demonstrated his skill as an anecdotalist, or storyteller, who emphasized the human dimension, while often overlooking the scholarship. His two-volume history of the war of 1812, running to 928 pages, was republished in 2011 as "Pierre Berton's War of 1812 (Toronto: Anchor Canada, 2011).

If you enjoy these quotes, be sure to check out other famous writers! More Pierre Berton on Wikipedia.

A Canadian is someone who knows how to make love in a canoe.