"Peter Jasper Akinola" is the former Anglican Primate (bishop)/Primate of the Church of Nigeria. He is also the former Bishop of Abuja (Nigeria's capital) and Archbishop of Province III, which covered the northern and central parts of the country. When the division into ecclesiastical provinces was adopted in 2002, he became the first Archbishop of Abuja Province, a position he held until 2010. He is married and a father of six.

A "low church" Evangelicalism/Evangelical, Akinola emphasizes the Bible and the teachings of the apostles (apostolic tradition) in a particular way. As one of the leaders of the Global South (Anglican)/Global South within the Anglican Communion, Akinola has taken a firm stand against theological developments which he contends are incompatible with the biblical teachings of Christianity and orthodox Anglicanism, notably setting himself against any revisionist interpretations of the Bible and, in particular, opposing same-sex blessings, the ordination of non-celibate homosexuals and any homosexual practice. He was a leading name of conservatives throughout the Anglican Communion, including the Convocation of Anglicans in North America.

If you enjoy these quotes, be sure to check out other famous clergy! More Peter Akinola on Wikipedia.

So that those who are bent to walk a different path may do so without us.

Many of you have one leg in ECUSA and one leg in the network. You must let us know exactly where you stand _ are you ECUSA or are you network? 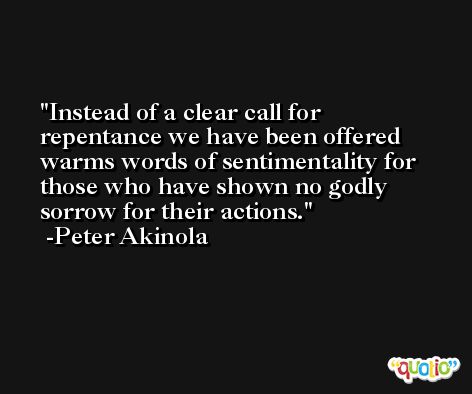 I don't think we've come to the point of schism, ... We are not breaking away from anybody. 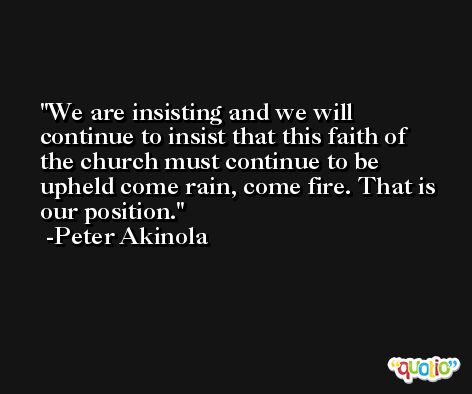 We are distressed by the unilateral actions of those provinces that are clearly determined to redefine what our common faith was once.