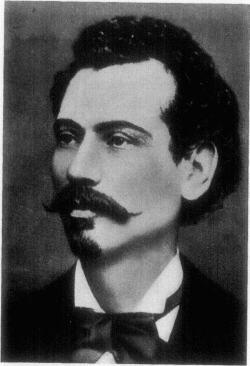 Peretz Smolenskin was born in Monastyrshchina, Mogilev Governorate, Russian Empire (in present-day Smolensk Oblast, Russia). His family came from Smolensk. His older brother was seized by the Czar's army and never returned. His father, falsely accused of a crime, was a fugitive for over two years and died when Peretz was eleven. At the age of 12, He left home to study at yeshiva for five years. He began reading secular books and learning Russian under the influence of the Haskalah movement.

Smolenskin traveled through southern Russia and the Crimea, supporting himself by singing in choirs and preaching in synagogues.In 1862 he settled in Odessa where he studied music and languages, taught Hebrew and, in 1867, published his first story. Between his travels through Rumania, Germany and Bohemia he acquired Turkish nationality. In Vienna he founded a Hebrew journal that became a literary platform for the Haskalah movement and the early Jewish nationalist movement. He was stricken with tuberculosis in 1883 and died on February 1, 1885 in Merano, Italy. He completed his last novel, The Inheritance, shortly before his death.

There are many fine ideals which are not realisable, and yet we do not refrain from teaching them.