"Percy Ross" was an United States/American self-made millionaire/multi-millionaire. He arrived in St. Louis Park, Minnesota around 1946-1947. He was associated with Ross and Ross Auctioneers. In 1959 he purchased a company called Poly-Tech, which made polyethylene plastic bags. He died in Edina, Minnesota on November 10, 2001.

Ross was best known for his philanthropist/philanthropy, particularly through his Thanks a Million newspaper column, where he would often grant requests for readers in need. Thanks a Million ran in over 800 publications for 17 years. It eventually became a Radio syndication/syndicated radio show running on over 400 radio stations. From the column and shows, he gave away an estimated United States dollar/US$20 to $30 million over a period of 17 years.

THIS COMMENT CANNOT REMAIN VIEWABLE unless it is cited. It will be a hard claim to make, based on solid statistics, from a reputable source. As it stands, it is completely POV -->

Ross was born and raised in Laurium, Michigan, on the Keweenaw Peninsula of Michigan's upper peninsula, about 10 miles from Michigan Technological University.

If you enjoy these quotes, be sure to check out other famous businessmen! More Percy Ross on Wikipedia.

You've got to ask! Asking is, in my opinion, the world's most powerful -- and neglected -- secret to success and happiness.

The world is full of genies waiting to grant your wishes. 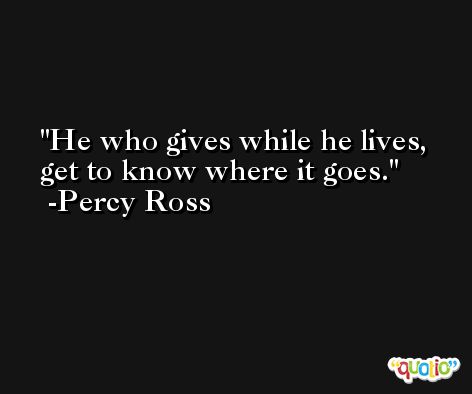 Many drops make a bucket, many buckets make a pond, many ponds make a lake, and many lakes make an ocean.