"Paul Goodman" was an American novelist, playwright, poet and psychotherapist, although now best known as a social critic, anarchist philosopher, and public intellectual. Though often thought of as a sociologist, he vehemently denied being one in a presentation in the Experimental College at San Francisco State in 1964, and in fact said he could not read sociology because it was too often lifeless. The author of dozens of books including Growing Up Absurd and The Community of Scholars, Goodman was an activist on the pacifist Left in the 1960s and a frequently cited inspiration to the student movement of that decade. A lay therapist for a number of years, he was a co-founder of Gestalt Therapy in the 1940s and 1950s.

If you enjoy these quotes, be sure to check out other famous writers! More Paul Goodman on Wikipedia.

The organization of American society is an interlocking system of semi-monopolies notoriously venal, an electorate notoriously unenlightened, misled by a mass media notoriously phony.

Enjoyment is not a goal, it is a feeling that accompanies important ongoing activity. 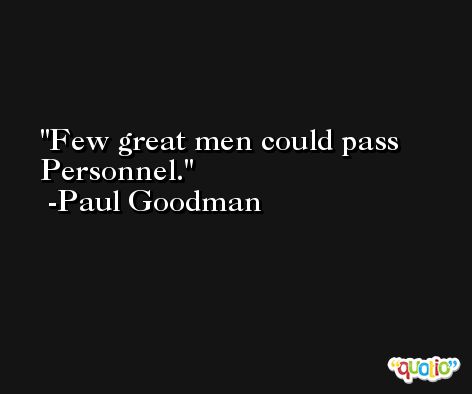 It rarely adds anything to say, ''In my opinion'' -not even modesty. Naturally a sentence is only your opinion; and you are not the Pope.

When the Devil quotes Scriptures, it's not, really, to deceive, but simply that the masses are so ignorant of theology that somebody has to teach them the elementary texts before he can seduce them. 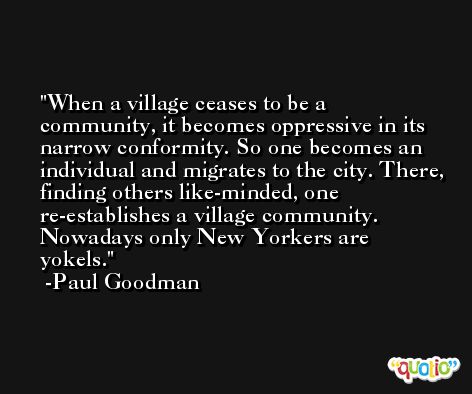 In America you can say anything you want - as long as it doesn't have any effect.

It takes application, a fine sense of value, and a powerful community-spirit for a people to have serious leisure, and this has not been the genius of the Americans. 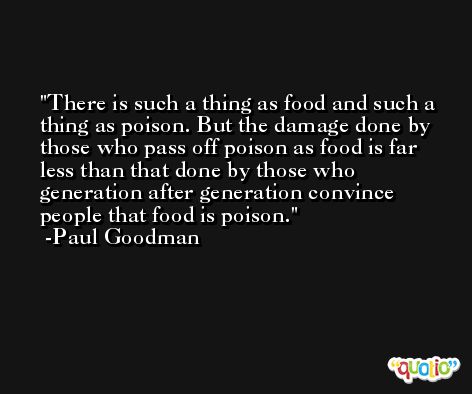 The important thing about travel in foreign lands is that it breaks the speech habits and makes you blab less, and breaks the habitual space-feeling because of different village plans and different landscapes. It is less important that there are different mores, for you counteract these with your own reaction-formations.