"Sir Oswald Ernald Mosley, Mosley Baronets#Mosley baronets, of Ancoats (1781)/6th Baronet" (16 November 1896 – 3 December 1980) was an English people/English politician, known principally as the founder of the British Union of Fascists (BUF). He was a Member of Parliament for Harrow (UK Parliament constituency)/Harrow from 1918 to 1924, for Smethwick (UK Parliament constituency)/Smethwick from 1926 to 1931 and Chancellor of the Duchy of Lancaster in the Labour Government 1929–1931/Labour Government of 1929–31, a position he resigned due to his disagreement with the Labour Government's unemployment policies. He then formed the New Party (UK)/New Party which merged with the BUF (which included the Blackshirts) in 1932.

Although relatively well funded, Mosley often overemphasized intellectual fine points that appealed to few voters, opposed free trade and associated closely with Nazi Germany. Mosley was Internment/interned in 1940 and the BUF was Proscription/proscribed. He was released in 1943, and, politically disillusioned in Britain, he moved abroad in 1951, spending most of the remainder of his life in France.

If you enjoy these quotes, be sure to check out other famous politicians! More Oswald Mosley on Wikipedia.

I am not, and never have been, a man of the right. My position was on the left and is now in the centre of politics.

There are periods in history when change is necessary, and other periods when it is better to keep everything for the time as it is. The art of life is to be in the rhythm of your age. 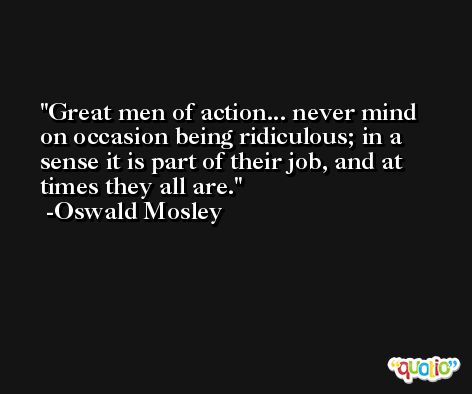 A prophet or an achiever must never mind an occasional absurdity, it is an occupational risk.