"Nicholson Baker" is an American writer of fiction and non-fiction. His fiction generally de-emphasizes narrative in favor of careful description and characterization. He often focuses on minute inspection of his characters' and narrators' Stream of consciousness writing/stream of consciousness. Baker has written about poetry, literature, library systems, history, politics, time manipulation, youth, and sex. He has written about libraries getting rid of books and newspapers and created the American Newspaper Repository. He received a National Book Critics Circle/National Book Critics Circle Award in 2001 for his nonfiction book Double Fold/Double Fold: Libraries and the Assault on Paper and the International Hermann Hesse Prize (Germany) in 2014. Baker has also written about and edited at Wikipedia. A pacifist, he has also written about the buildup to World War II.

If you enjoy these quotes, be sure to check out other famous novelists! More Nicholson Baker on Wikipedia.

I no longer want to live in an apartment furnished with forklifts and backhoes. 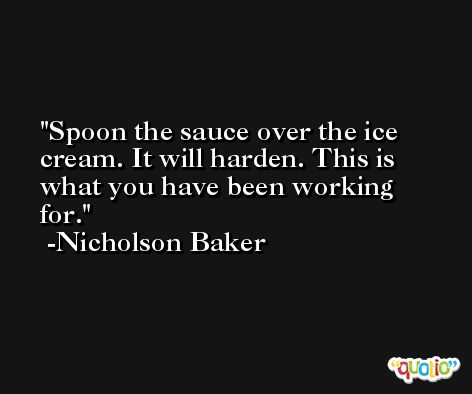 Until a friend or relative has applied a particular proverb to your own life, or until you've watched him apply the proverb to his own life, it has no power to sway you.

Haven't you felt a peculiar sort of worry about the chair in your living room that no one sits in? 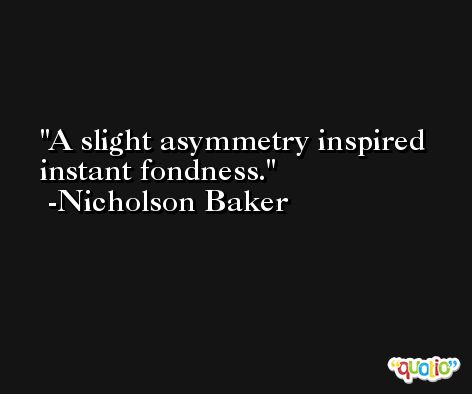 Footnotes are the finer-suckered surfaces that allow testicular paragraphs to hold fast to the wider reality of the library.

The force of truth that a statement imparts, then, its prominence among the hordes of recorded observations that I may optionally apply to my own life, depends, in addition to the sense that it is argumentatively defensible, on the sense that someone like. 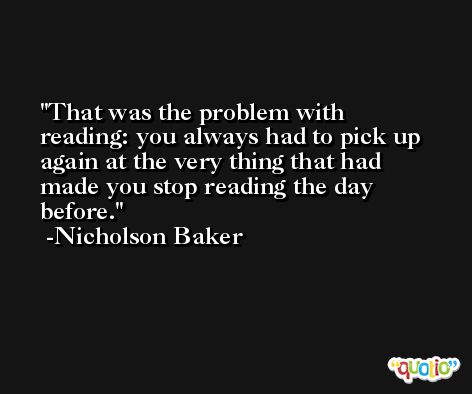