"Najam Aziz Sethi" is the 16th and former (Caretaker government/caretaker) Chief Minister of Punjab, Pakistan/chief minister of Punjab. He is an award-winning yet controversial Pakistani journalist, editor, and media personality, the editor-in-chief of The Friday Times, a Lahore based political weekly, and previously the editor of Daily Times (Pakistan)/Daily Times and Daily Aajkal newspapers. He also has a popular current-affairs program on Geo TV called Aapas ki Baat and owns Vanguard Books, a publishing house and chain of bookstores.

In 1999, he was arrested by Inter-Services Intelligence following an interview with the British Broadcasting Corporation on government corruption, and detained for almost a month without charges. In 2008 and 2009, he was subject to death threats from Islamist groups for his papers' anti-fundamentalist stances.

People who question some of the facts of the Holocaust are ostracized; most publishers are so sensitive they won't even get into the argument. A degree of censorship is imposed that is not articulated in this case.

He will in a way be saying; I am the man in Pakistan. Don't do anything to destabilize me. Don't be misguided by liberals. 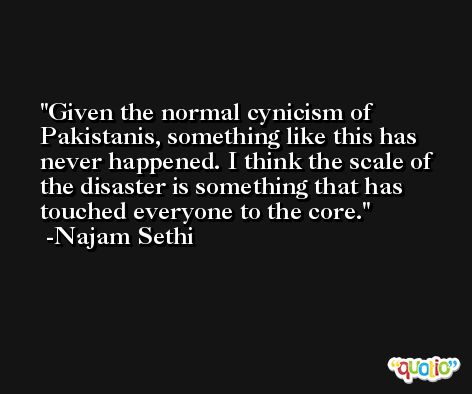 The peace process has been buffeted.