"Moses Hadas" was an American teacher, one of the leading classics/classical scholars of the twentieth century, and a translator of numerous works.

Raised in Atlanta, Georgia/Atlanta in a Yiddish-speaking Orthodox Judaism/Orthodox Jewish household, his early studies included rabbinical training; he graduated from Jewish Theological Seminary of America (1926) and took his doctorate in classics in 1930. He was fluent in Yiddish, German, ancient Hebrew, ancient Greek, Latin, French, and Italian, and well-versed in other languages.

His most productive years were spent at Columbia University, where he was a colleague of Jacques Barzun and Lionel Trilling. There, he took his talent for languages, combined it with a popularizing impulse, to buck the prevailing classical methods of the day—textual criticism and grammar—presenting classics, even in translation, as worthy of study as literature/literary works in their own right.

This approach may be compared to the New Criticism school: even as the New Critics emphasized close reading, eschewing outside sources and cumbersome apparatus, Hadas, in presenting classical works in translation to an influx of post-war G.I. Bill students, brought forth an appreciation of his domain for those without the specialized training of classicists.

If you enjoy these quotes, be sure to check out other famous writers! More Moses Hadas on Wikipedia.

I have read your book and much like it.

This book fills a much-needed gap. 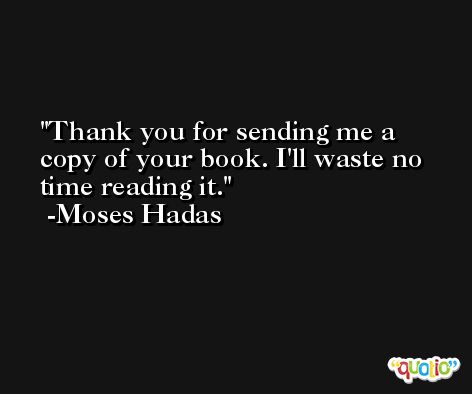 The larger and more indiscriminate the audience, the greater the need to safeguard and purify standards of quality and taste.

The greatest gift is the passion for reading. It is cheap, it consoles, it distracts, it excites, it gives you knowledge of the world and experience of a wide kind. It is a moral illumination.